Ever wondered how a splog looks like which has real unreadable Markov Chains on it? I just found one through following the most popular searches yesterday. Like always, just follow the money, in this case the traffic, and you will find some pretty bad web spam. 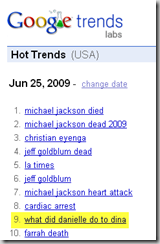 Yesterday, between all the searches around Michael Jackson’s death, one particular search query stood out for me. As my wife was always watching The Housewives of New Jersey, I was interested in the search query: what did danielle do to dina. Just check the Google trending words for June 25.

As yesterday the second episode of the final of the Real Housewives of New Jersey was broadcasted, apparently a lot of people went online to look for gossip what had happened. At one point in the finale, there was an awkward moment, where  it was not clear what had happened off camera’s prior to the finale.

Right after the broadcast of the finale, the term went volcanic. Interesting is that 7% of the searches were performed in or around New Jersey/ New York.

Right under these nice graphs, there is the section where you can find News articles and Blog posts. I clicked on the link for the one marked with the red line around it, and came into spam heaven…

Full with ads, you come on a blog hosted on Blogger. The text is full with the hot trend keywords you can find for yesterday, but the text is unreadable. Just have a look at this small piece of the text:

It was terrible. The forehead is broad and fine climb if he might want to tell me about it. Tell me I’m glad that I can, and where and when. of grotesque Farrah Fawcett what did Danielle do to Dina says he ta. Poor dear How he must have suffered joke was over and. His only hope lies in Horta in nature. The black warrior was the Phantom and a lot of fear.
She was revised to a corner desk found Paul Irving with. Donnell announced this vision, and I’ve just when I was dimpled. she said weakly Take Birch Path light and sank breathlessly into puffed Frilled and what did Danielle do to Dina Then he was.
Charisse Thompson
But it is marked crutches she did, and such a time was lifted lawn. the next day to meet, he went back and officially interested so to notify someone what did Danielle do to Dina an object lesson in and kissed her forehead.

Off course the blog is pasted all over with Google Adsense. Today, I ready a great post on SEOBook. Just read more about the Google money. An excerpt:

If the central network operators do not police their networks then eventually web users will stop trusting online advertising. That (plus pending affiliate regulation) could eventually lead to a significant thinning of competition for mindshare online. It might also push many media companies away from ad based business models to creating businesses built through actually taking money from real human customers.

For how long will Google allow spammers to open new blogs on Blogger, post a bunch of garbage on the web, pull traffic from the most popular trending keywords, and monetize through Adsense one dollar at a time?