For some time, we SEO’s have known Google Webmaster Central query data is not always accurate. Ian Lurie even called it worthless. Still I look at the data once in a while to find good opportunities or small wins. For the last couple of weeks, I’ve been following a rather curious case in our Webmaster Tools data (Google Webmaster tools from now on abbreviated with GWT). I suspect the phenomenon I’m describing in this post has started to occur with the change in image search on Google, which resulted in a massive decrease in image search referrals for websites explained here by Define Media, (trust me, I know; I lost a lot of image search traffic on this website). The data in GWT has become even more inaccurate. Here goes…The Curious Case of Webmaster Central Search Query Data.

When you do a search for the keyword Washington DC, you will spot an image from Airbnb’s Washington DC Neighborhood page in the image search universal box: 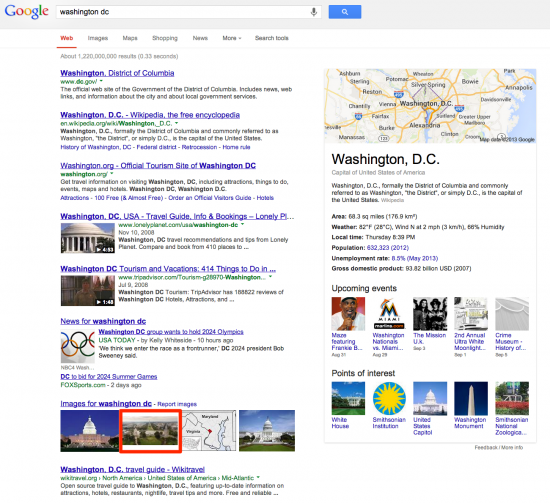 You would think you could expect a whole lot of traffic from an image like this high up in the Google search results. This might have been the case, where the old image search lay out could be a great source of traffic for any website, however, let me disappoint you right there, that since the new image search lay out, hardly any traffic is clicking through to the website where the image originated. Google, , is keeping all those visits on their own properties…

Here is that same search query on Google image search:

As you can see, the Washington DC image from Airbnb ranks really well, even without proper SEO best practices like file name of the image nor the domain it’s being served from (yeah, don’t get me started on that one..)

At first glance, looking up the Washington DC Neighborhood page in the Top Pages report in Google Webmaster Central it looks all fine. The Washington Neighborhood is the second page when it comes to impressions in the Google search results, when filtered on the US and Web alone! However, if you’re in the travel vertical, you’ll know this order of destinations is not right! New York is a much more popular destination, where especially Airbnb is well represented with a large number of great listings in Manhattan or in Brooklyn. Even the San Francisco on Airbnb should show larger number of impressions, just from a gut feeling alone.

It becomes even stranger if you click the page open to see the search terms for that page. Suddenly, the query Washington DC shows a higher number of impressions than the overall page does. The clicks are way off,  and not by a little, but by a landslide…

My hypothesis on the differences between the numbers as reported in GWT is simple. Back to the Image universal search box on the Washington DC query:

What if the number of impressions represent the number of times this image was presented to searchers in the SERP’s, both web or images. Where the the lower click number, 700 clicks, represents the actual to the page on all keywords, and the clicks on the keyword Washington DC, 3200 clicks, represents the clicks on the image where those folks stay at Google, but only see the larger image as it was crawled.

What do you think..? Please let me know down here in the comments…