What would you pay for 4,873 links to your site? Not just some random links, but high quality links from high PageRank sites. Here and there a .org, a great number of different anchor texts used over these links. Would you buy them, given the strategy is not approved by The G? What is I tell you these links would only cost you $1.14 per link? Would you like to have some more juice flowing your way for that kind of money?

That would cost you $5,600. The deal was only possible in a package!

The story of Journalspace.com is sad but true. Apparently a fired employee deleted all the data in the databases, and there was no copy!

It was the guy handling the IT (and, yes, the same guy who I caught stealing from the company, and who did a slash-and-burn on some servers on his way out) who made the choice to rely on RAID as the only backup mechanism for the SQL server. He had set up automated backups for the HTTP server which contains the PHP code, but, inscrutibly, had no backup system in place for the SQL data. The ironic thing here is that one of his hobbies was telling everybody how smart he was.

The domain was being put on eBay to sell for the highest bid. Part of the proceedings were actually donated to charity. From the eBay listing:

Journalspace has been a popular social blogging site since 2002. We recently lost our data in a crash, and rather than start again, we’d rather leave these domains in the hands of somebody who can do something cool with them. If you’d like to start your own social blogging site, we recommend the awesome BuddyPress extensions to WordPress MU (buddypress.org) — it’s a free, open-source package that combines a social networking platform with the popular WordPress blogging software.

15% of the final sale price will support Susan G. Komen For the Cure – Headquarters.

About this nonprofit:
To save lives and end breast cancer forever by empowering people, ensuring quality care for all and energizing science to find the cures

The auction ended at $5,600, which is a great bargain for this domain.

The domain goes back to 2001. A long time, from 2003 until 2008, the domain has been used for as a blog platform. Everybody could start a blog, with their own space available. This meant that a great number of pages have been indexed, with different sorts of content.

The number of backlinks to the domain is over 4,500. In fact, according to Yahoo Siteexplorer, the domain has got 4,873 backlinks. Of these backlinks a number of them can be regarded as highly valuable: GMPG.org, microformats.org & wikipedia.org

In total the domain has got: 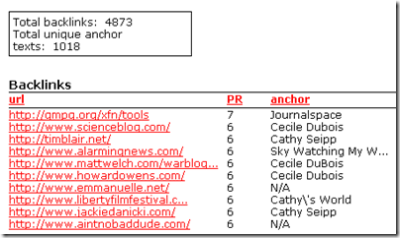 There are a number of different anchor text links to the domain. If you would buy this site, chances are that with some on page optimization, smart redirects and quality content, you could rank targeted pages for the most linked keywords pretty high.

The auction ended on January 11, and the day after the closing of the auction, the new owner has already launched a complete new blogging platform. Installed WordPress Multi User on the domain, and has a great number of the original bloggers back. The WP MU install is also expanded with the Buddypress plugins, which give Journalspace social networking elements. 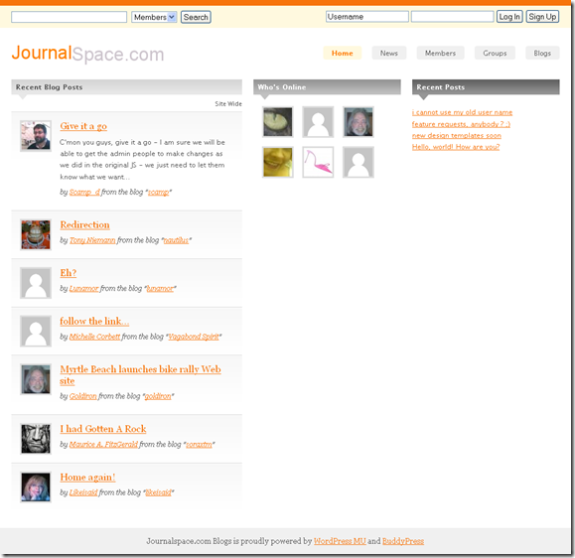 End 2008 there was a drama resulting in loss of some data
We felt sorry since journalspace.com was active for so many years and
we think along with a lot of visitors journalspace is an asset to the internet.

11 january 2009 we agreed with the old owner to take over the domains.

I wished I had the money to invest in such a domain. It an grow out to be a great place on the Internet, especially with the free software of WordPress and Buddypress.

I’m overall happy with how this story ended. Somebody is taking the challenge to rebuild Journalspace.com and provide the blogging community that had found a place at JS with a new chance of writing, expressing AND connecting. The site has found a rightful owner.