Home » What Can I do to Stop SOPA

You can’t have ignored it yesterday. Unless you live on a remote island with crapy Internet connection, or was spending time in a place like Las Vegas, the Stop SOPA & PIPA protest must have hit you somehow. Lots of website went dark, others had a specific protest on their homepage.

Slashdot had taken a different approach, where two stories were persistent at the top of the homepage: 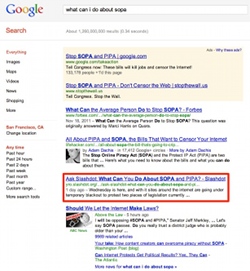 However, as a non-US citizen, but a green-card holder, I’m not allowed to vote and cannot register myself as politically active. What I can do, is to help drive awareness of the SOPA & PIPA bills and why these are bad for the Interwebs and Innovation in general.

The story on Slashdot about what you can do to stop SOPA is currently ranking on a 3rd position in the Google SERP’s, which makes me happy to help spreading the word and raise awareness (see screenshot on right). As the article has a large number of great resources summed up, but is a lot to digest, here is an outline:

The second story on Slashdot gives a good overview what discussions you should read to educate yourself what is going on here and why people and companies are protesting and even take the protest to the streets:

Since their inception SOPA and PIPA have raised concerns about blacklisting from online freedom advocates, and tech industry giants. Law professors worry that they could stifle growth and innovation. Other’s have warned that the legislation would hurt scientific debate and open discourse on the internet. SOPA and PIPA are not without support however. In fact a wide variety of companies have backed the proposed laws, bringing together an eclectic group. After months of debate, the removal of one of the more controversial provisions, and The White House expressing its own concerns over the law in its current form, Representative Eric Cantor (R-VA) announced that he was shelving SOPA. PIPA however remains, and it is likely that a re-worked version of the House bill will be brought up soon. 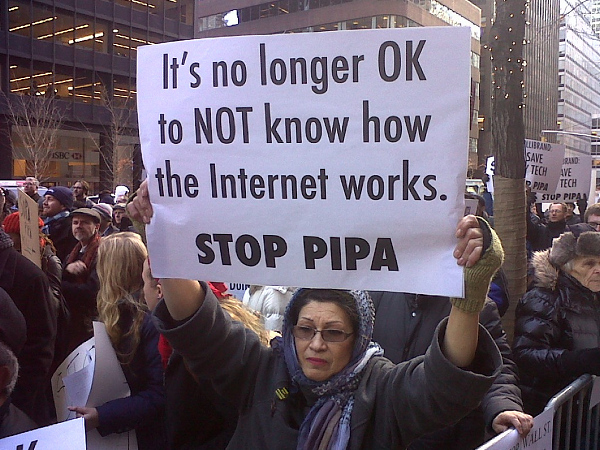 Here is a great video explaining how SOPA & PIPA will impact innovation and the Internet as a whole.

PROTECT IP / SOPA Breaks The Internet from Fight for the Future.

What to do against SOPA / PIPA:

Even with the strike day behind us, the fight is not over! There are two big things: contact your representative, and spread the word.

SOPA & PIPA must be stopped!