Home » Thanks Hackers for the extra Traffic

Back at the end of August, Linux.com got hacked, Kernel.org got hacked. The sites were compromised and the Linux foundation took the whole linux.com site down to make sure no visitors were getting infected. Kernel.org was also taken down where the site showed a note with the following text:

It was silent for more than a month, until finally on October 5th it was reported that Kernel.org was back up. During that month of the site being down, Google actually took the site out of the index. The right thing to do, as there was nothing on the domain. A search for the exact domain did not return the homepage of the site? Or should have been there a link at the top of the SERP for the Kernel.org website, where a note was displayed discussing the situation. 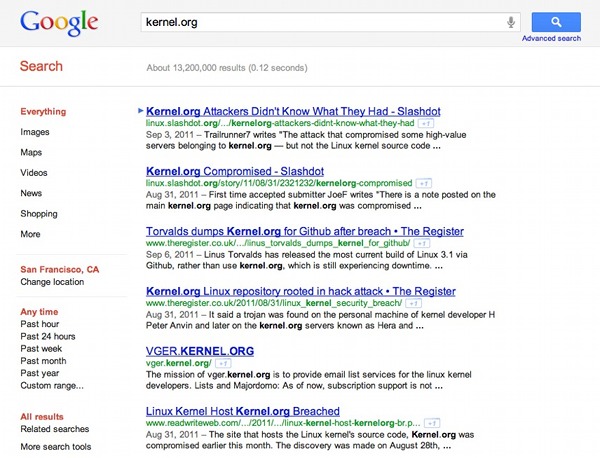 The two top stories showing up in the SERP because Google removed the Kernel.org domain were from Slashdot, where a lively discussion about the situation was being held. I was just focussed on the extra traffic on the Kernel.org keyword we were getting, which is clearly displayed in the traffic graph below here. You can see when Google took out the domain Kernel.org, and when the site got fixed.

So many times I’ve been happy I had taken the effort to make a screenshot of the SERP when I saw a peak in Keyword traffic and found the reason after a little investigation. How many times does it happen to you that you would like to explain something weird in the SERP’s, and you forgot to make a screenshot of what you just have witnessed. Hard to explain my story on the Kernel.org position 1 & 2 if you only have this screenshot in which Kernel.org dominates the top of the SERP (Although the fresher story from Slashdot of Kernel.org being back online does make it to the first page): 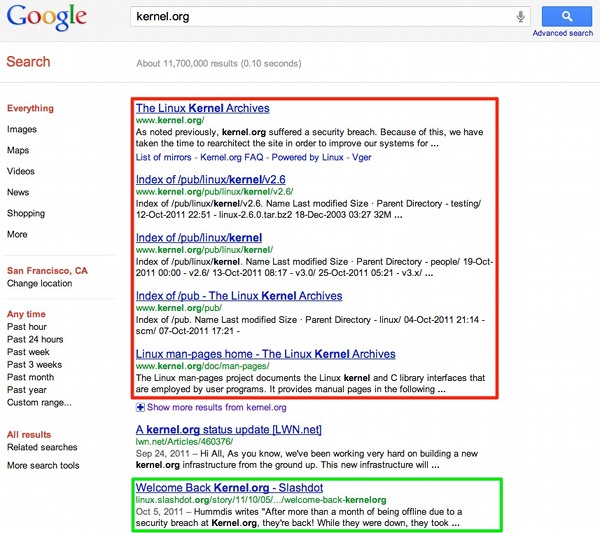 As I have done SEO for a large e-commerce site for so long, I gain new insights into the SEO for News sites, where the story  is only relevant a short period of time, and your traffic volume is highly dependent on the competition for the positions in the SERP’s, the search volume and the quality or your content.