My friend RSnake posted about Deceptive Facebook Ads today. His post was about the usage of his Facebook profile image in an ad to push Windows 10. Although it might be somewhat deceptive, it’s probably buried somewhere in the Facebook Terms & Conditions nobody has really read before they agreed to these, or as Robert cleverly commented, Facebook changed these on us. Just recently I came across some more deceptive Facebook ads, where my suspicion is Facebook would take these down immediately if known for several reasons.

Check out the Facebook ad which appeared in my newsfeed. Obviously I’m being targeted with a look-like-sports news ad, because I work in sports at Fanatics. Or at least that’s what I like to think, but I can easily being targeted because I’m a white male over 40 who might need some help with weight management. (remember this last line) 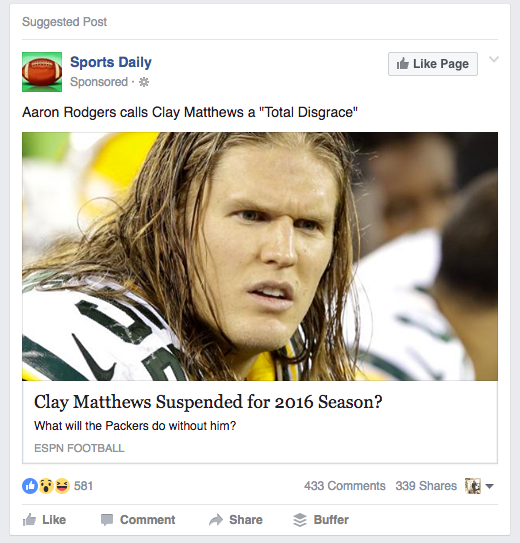 This is Clay Matthews, a NFL player from the Green Bay Packers. The title is quite catchy, especially if you’re a Green Bay fan, and would be scared one of your star players will be suspended for a full season. Good bye Fantasy team, good bye Super Bowl aspirations. You click quickly to read what all the fuzz is about, and land on a “real article” from what it looks like ESPN.

The site looks real, the writing looks legit as being a real article. Informative and praising Clay Matthews for his performance. Even the writer of the article is showing at the top of the post, just as with the real ESPN site. It goes on to describe how Clay’s team mates are not content with the news he has been using a combination of popular supplements to burn fat, pack on muscle and skyrocket energy. 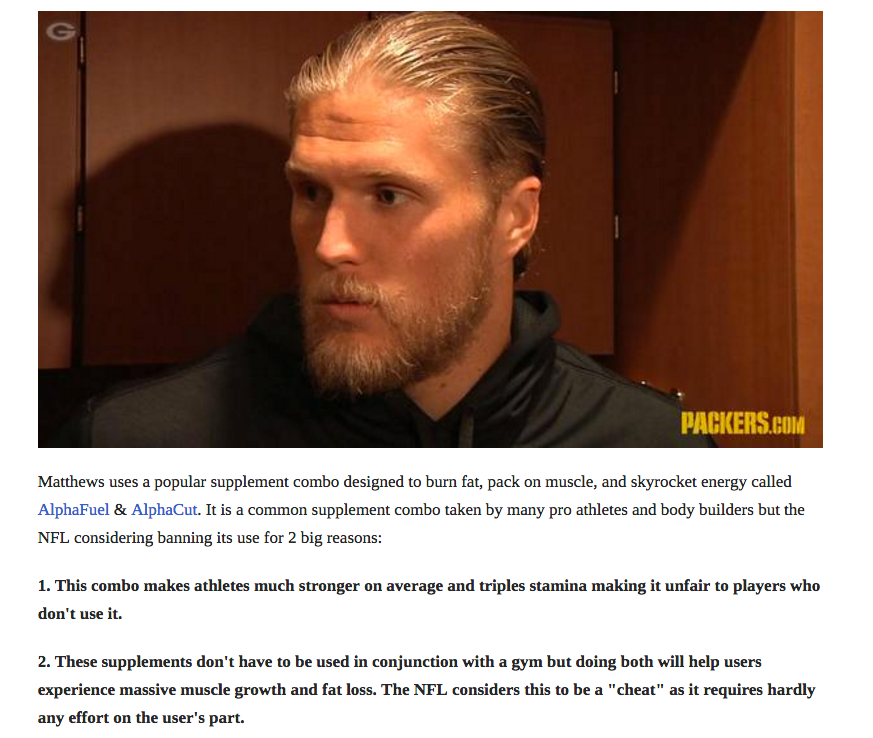 However, the article is completely fake, and is being used as a squeeze page for performance enhancement supplements. Lower on the page, the so called ESPN writer is reporting on his own experience with the same enhancing drugs Clay Matthews supposedly has been using, although claimed these are completely legal within the NFL. The writer is reporting on his experience, and how good these worked for him to lose weight, get more energy and build muscle. 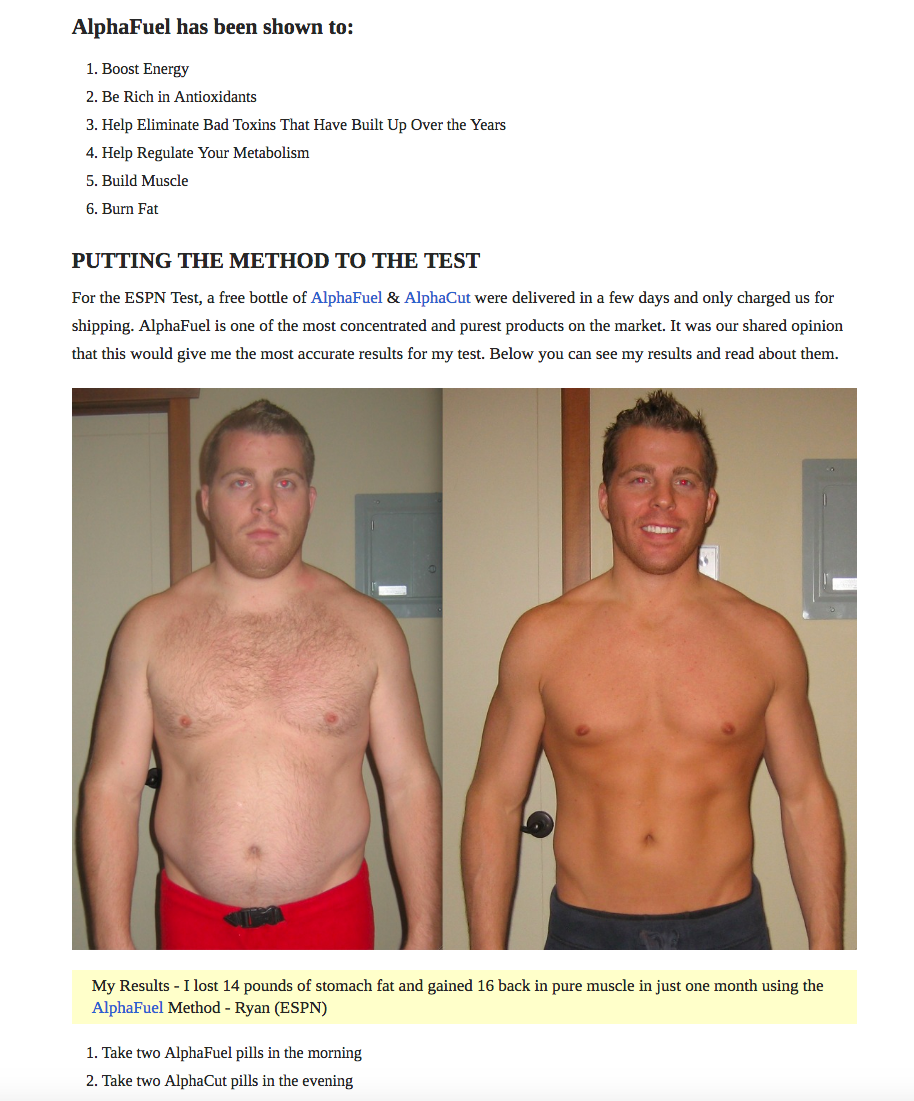 And after you first got tricked into how professional athletes supposedly are successful on the field, then a “real” ESPN editor tested the methode out to see it it works, so you don’t have to, it’s time to pull out your wallet, and order a test package for you to try. 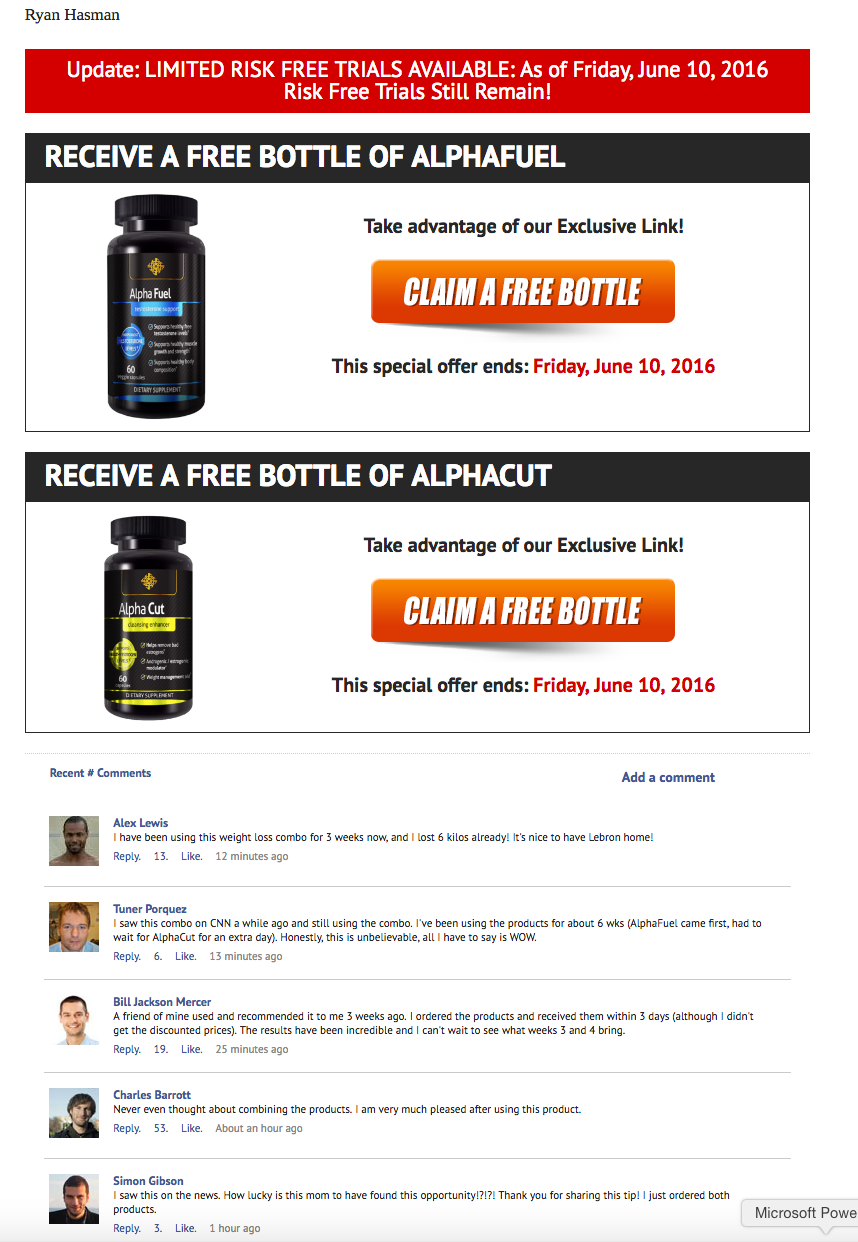 And just check the fake Facebook comments below the conversion buttons. These were all fake, as I couldn’t click through to the Facebook profile or like & reply on the comments. All happy fake customers.

This is not all, as for the left navigation, where other articles are linked, you would think when you click on the link you would land on said article… nope.

Every link on the page, will get the visitor to a page selling the Alpha Fuel product:

A number of parties here are wronged.

Why is this happening, why is Alpha Fuel going through so much efforts and potentially law suits to sell this product? Well, there is a whole lot of money to be made in food supplements. And this might even be one of the Alpha Fuel affiliates making a quick buck on every sale.

What is interesting is that the people behind this are using the latest news headline to inspire their content. Just one week after major sports & politics publications published articles on Michael Jordan speaking out about police brutality and shootings, we see the similar headline being used in a fake article. This time the headline reads: “MJ Exclusive Interview; LeBron is a Cheater”, with an Ad copy of: “MJ can’t keep quit anymore”. 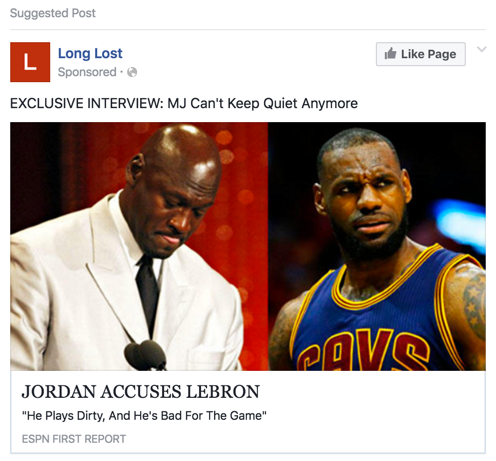 And again, the article is about how LeBron James supposedly would use a certain performance enhancement to get stronger and win the NBA championship.

Less than 24 hours after Lebron’s historic NBA Championship, he already has his fair share of critics. But he may have just gotten his biggest critic of all. Michael Jordan has already had his disdain for the arrogance of Lebron, but MJ sat with us at ESPN to accuse James of something no one was expecting. “Lebron is not a natural athlete, it’s just plain and simple. I’ve seen him put on 30 lbs of muscle in an off-season, and cut 20 lbs of body fat in another. It’s absolutely not natural, and he’s ruining the league for everyone else,” says Jordan. Reports have surfaced about performance enhancing supplements that NBA’s elite are using to keep their edge through the rigorous season.

And the page is similar to the one described above, it quickly goes into selling the stuff which would make you fit and loose weight. You can trust it, the writer of the “ESPN” article tried it out himself, and has the pictures to proof it works!