(Updated Jan-3-2013; since I started writing this post, a lot has changed. I initially began to write about the Auto-generated pages by YouTube back in Oct 2012. Only being able to finalize the post after the FTC closed the negotiations with Google on their behavior)

For an SEO workshop at First Round Capital, I collected a number of new screenshots of changes in the way Google is displaying results in Search. I stumbled on a YouTube page, which is, after re-reading the guidelines, is in clear violation of the Google Webmaster Guidelines. More and more you see Google taking an aggressive stands towards implementing their own domains into the results, either as Universal search boxes, or as normal results. But who cares, not the FTC: see here! After all, it’s Google’s index, Google’s website and Google’s Audience, right..?

In Google Webmaster Guidelines you can find the following Technical Guideline:

Use robots.txt to prevent crawling of search results pages or other auto-generated pages that don’t add much value for users coming from search engines.

For years, Google has been advocating the prevention of crawling of search results for any website. How many in-house SEO teams have been scrambling lately with the removal of Search-in-Search. I know one large eCommerce company was hit really hard late October this year. How convenient, with Google Shopping Pay-for-Play and Black Friday and Cyber Monday just around the corner.

“We believe the changes are best for our users, where we optimize for the user experience. We cannot disclose the details of the changes made to our algorithms and the way we rank websites. Google publishes Webmaster Guidelines recommend you go through these. Are you familiar with our webmaster Guidelines?

(Not an official quote, more my best recollection of what was the answer to our questions)

And with that, the discussion is closed. Even the biggest budgets don’t give you access to what is happening in the Googleplex with regards to the rankings. Trust me, I’ve been on the receiving side of that message!

But do you expect action will be taken against YouTube…? See this Auto-Generated YouTube page, filled with Michael Jackson video’s… 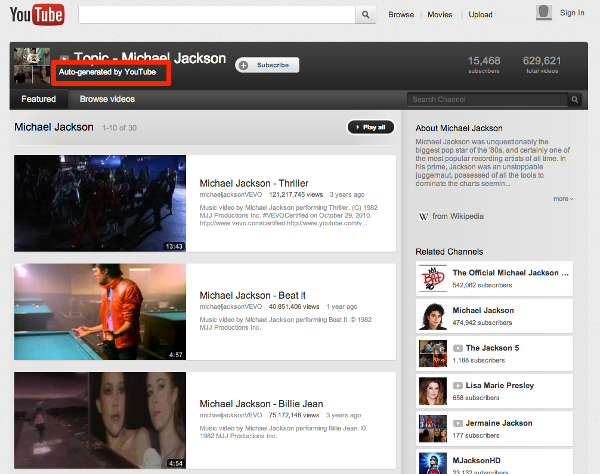 As you can read from the final decision (or negotiation, it’s however you would like to look at it), the FTC does not see any ‘Search Bias’ in Goolge results.

Under the same commitment, Google also has promised to provide all websites the option to keep their content out of Google’s vertical search offerings, while still having them appear in Google’s general, or “organic,” web search results. The FTC investigated allegations that Google misappropriated content, such as user reviews and star ratings, from competing websites in order to improve its own vertical offerings, such as Google Local and Google Shopping. Some FTC Commissioners were concerned that this conduct might chill firms’ incentives to innovate on the Internet.

The FTC conducted an extensive investigation into allegations that Google had manipulated its search algorithms to harm vertical websites and unfairly promote its own competing vertical properties, a practice commonly known as “search bias.” In particular, the FTC evaluated Google’s introduction of “Universal Search” – a product that prominently displays targeted Google properties in response to specific categories of searches, such as shopping and local – to determine whether Google used that product to reduce or eliminate a nascent competitive threat. Similarly, the investigation focused on the allegation that Google altered its search algorithms to demote certain vertical websites in an effort to reduce or eliminate a nascent competitive threat. According to the Commission statement, however, the FTC concluded that the introduction of Universal Search, as well as additional changes made to Google’s search algorithms – even those that may have had the effect of harming individual competitors – could be plausibly justified as innovations that improved Google’s product and the experience of its users. It therefore has chosen to close the investigation.

Now, I came to the auto-generated page on YouTube by doing a simple search on Google for the query: Michael Jackson. Check the screenshot, where all Google properties are in the red boxes, with the knowledge graph content in the green box (also linking to other Google pages) 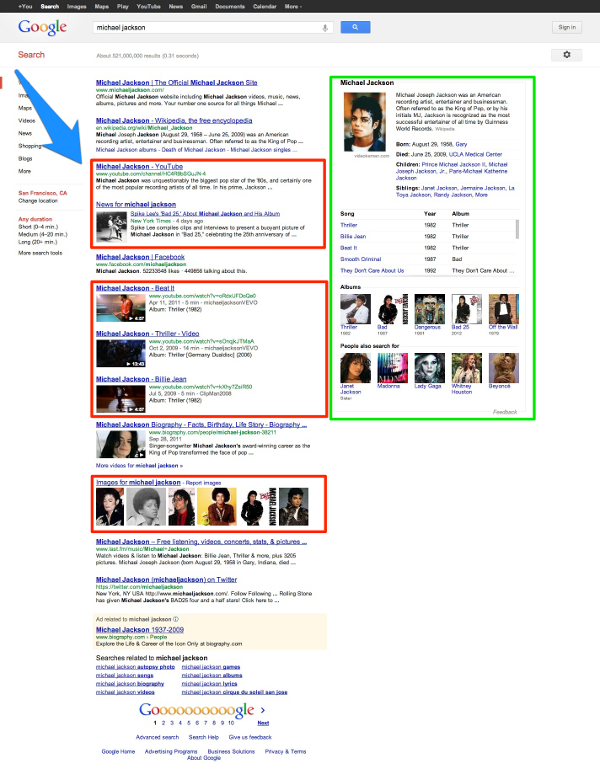 The big blue arrow is pointing to the page on YouTube which does not have an embedded video in the SERP. This initially caught my attention, as normally, YouTube video’s are integrated through a Universal Search One Box.

Now, the questions is, how many ‘real‘ organic results can you count..? Right; 6! It’s what we call a 7-SERP, as there are only 7 results organically ranking for the query. But with the Auto-Generated page from YouTube at #3, you can bet Google is raking up the pageviews on their own site.

Expect the worse is yet to come

With the News on the FTC arrangement with Google today, they have carte blanche from one of the only government institutions which could have stopped more integrations in the search results.

Disclosure: because I expected the outcome  due to what I believe could be called a lack of understanding of the government officials, I went long in Google back in December. It has paid off so far… 🙂

Postscript: Don’t get me wrong, I live of the fruits of the changes made by the search engines. SEO is constantly evolving, and there is a growing need in corporations to understand the direction and best practices. I wrote the post for my entertainment, and to be able to get my thoughts in order of where it’s all heading.