Home > Internet > Twitter > Twitter Engagement Testing > Are you using images for maximum impact?
Based on a post from MG Siegler, in which he describes the practice of posting images with text on Twitter, I wondered how my tweets with embedded images did in terms of engagement. A quick check with Twitter analytics gave me two interesting data points of last week tweets; One tweet got a massive engagement rate according to Twitter analytics. Normal tweets I post most of the time get around than 3-4% engagement rates, outliers are scoring up to 10%! This one got a whopping 17.5% in the first 24 hours!

A couple of things…
Funny enough, a tweet from a week later, during Stormageddon here in San Francisco, actually received almost as high engagement as shaved head tweet. This one was a picture from Sharknado, a couple of sharks swimming in the basement of a shopping center. Obviously this was a test to see what kind of engagement I could score on said tweet. Pff what do you think, sharks swimming in the streets of San Francisco… 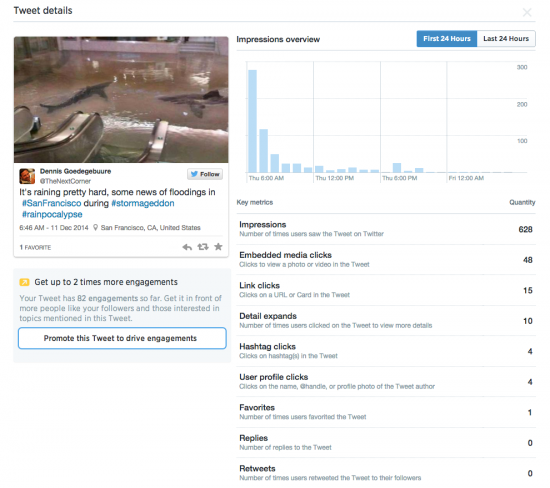 With these detailed Twitter analytics, it’s becoming easier to start optimizing for engagement on your tweets. More visuals, less boring content!Twitter Engagement Testing > Are you using images for maximum impact?
Let me know what your engagement looks like on your tweets, would love to hear!