Home » The Founder of Twitter Retweeted My Work, and this is what Happened…

I’ve been a user and a fan of Twitter since I got introduced to the service back in 2008. So working closely with Twitter to get the Twitter Buy Button integrated with Fanatics was already excited. But getting a retweet from the original brain behind he service is not something I could have imagined. Let alone dreamed!

Last week, for the NBA draft, we prepared 4 tweets for 5 of the first round draft teams to have the shirt of the player who was just drafted being featured in the tweet. Within the tweet, you could buy the shirt right there, with no click out to a different website, check out right there! As Twitter is going to behave more and more like a platform, these integrations will happen more and more within the tweet. As long as we can scale volume in the items sold, I’m happy testing this out!

Here is a screenshot of the buy button integration in the tweet, working at the Twitter platform. With below the original tweet as embedded into WordPress, as the buy button does not work outside of some of the walled garden of Twitter!

D'Angelo Russell goes #2 to the Lakers in the #NBADraft! Get the jersey @Fanatics http://t.co/6ojBJiyYCj

I have a soft spot for Twitter e-commerce, since I’ve been walking around with ideas in my head from the moment I bought the domain ShopTwits.com. Inspired by the quick launch, and early success of StockTwits.com, I bought the domain with the intend to build a shopping application on top of Twitter. Back then I was still working for eBay, so e-commerce was running through my veins.

I dropped the ideas, and stopped working on it as I was too busy with family, friends and new work at Airbnb. But I never got the concept of real-time commerce on Twitter out of my head!

And what do you think, the current (interim-)CEO of Twitter takes “notice” of our attempts to build a new service on their platform, and retweets one of our tweets with the buy button integration. I never would have thought I would be so happy with the action of the man who thought out this awesome service I’ve been using for the last couple of years, and has been taking the world by storm… at least the breaking news section of media! 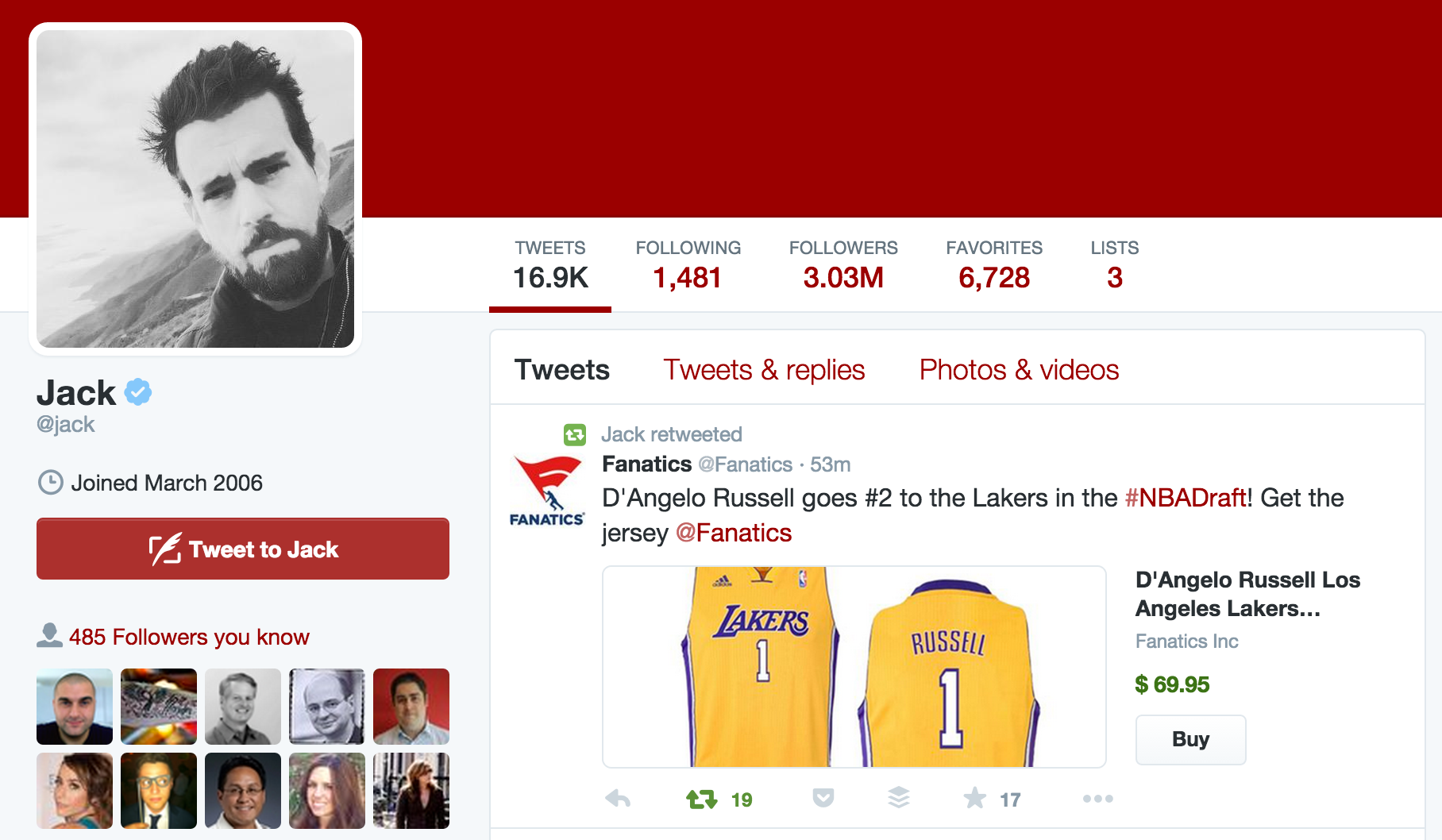 The outcome of the campaign wasn’t that great yet!  It does show the opportunity to get much higher engagement on tweets that are retweeted by famous and broadly followed accounts. The other 3 tweets got single digit engagement, where the Lakers jersey tweet engagement shot up as soon as Jack shared it.

Couple of things we learned

Next time we will try with a more general product, see what kind of volume we can get out of it.Our strategy to test out the new feature on Twitter was probably not the right one, since we picked a product and a difficult event. Combined with Twitter advertising, targeting the right audience, we could have done better! I foresee Twitter having a real successful product feature, which for e-commerce players is a welcome new channel.

I’m a big believer in the potential for e-commerce on Twitter, hence my early thoughts buying the domain shoptwits.com and constantly thinking how to develop a product around this. T-Commerce will take off, where I expect sports to play a big role. When your team wins, buying a jersey or championship tshirt is just one tweet away!