Home » Couch Commerce – Why eBay Should Have Bought IntoNow

Back in April, Yahoo made one great move. Yahoo bought IntoNow for around $30 million. The start-up was just 12 weeks old! Last week Yahoo/IntoNow launched the iPad application that makes use of the IntoNow technology.  eBay should have bought it back in April for several reasons. Now they should request access to an API from Yahoo to make use of its technology. I will explain below.

IntoNow, The Shazam for TV

One of my favorite applications on my iPhone is Shazam. Where Shazam lets you discover new music if you hear a tune somewhere by just letting the application listen for 30 second to the music, Intonow can recognize which TV program you are watching.

From the Crunchbase description of IntoNow:

IntoNow is a consumer tech company that aims to enhance the way people engage with each other around the shows they love. … Based on the SoundPrint platform, IntoNow gives users the ability to almost instantly recognize TV content and then helps them share and discuss those shows with friends, both within the product and through other social streams such as Facebook and Twitter.

Background; The start-up that never will see the Light 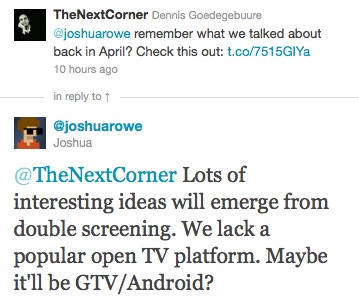 Eight months ago, while I was in Sydney Australia for SMX Sydney (great overview of this conference here), I was catching up with the MD of eBay.com.au. She and I have known each other since eBay marketing college back in November 2004. She always said I should talk to her husband, as we are alike in our love for new technology, always on the edge of the next big thing, and really understands how the Internet works (at least, we think for ourselves).

Joshua (fertile) gave some great pointers on the ideas I presented to him, and we ranted on for a good half hour about start-up ideas, technology and other concepts.

Ever since I read the article on Techcrunch about Yahoo buying IntoNow, I couldn’t help thinking about creative ways to use the technology from IntoNow for a shopping related iPad application. Let’s face it; the two screen TV watching is becoming reality very fast. Checking Facebook, chatting on Twitter or shopping while you watch your favorite series is taking over. This is what eBay calls Couch Commerce.

So my start-up idea was born

Building an iPad shopping application using IntoNow technology, either through an open API or through a licensing deal with Yahoo, which would allow you to get direct shopping deals for products making an appearance in the TV-show you are watching.

To be able to make this concept reality, I started to do research. A couple of uncertainties and time constraints made me delay the project, which probably today will be canceled after all. These include:

Back in the US after my travels to Australia, I posted two questions on Quora:

Having too much on my plate, not being able to break free for some coding tutorials and a short holiday in The Netherlands, brought me to the end of the summer starting a new job at Geeknet Inc. The start-up idea was still in the back of my head, however, I chose to pursue other, more promising ideas for concepts. The ones that made it pass the drawing board, but not launched yet! There is much more good stuff where this idea came from 🙂

eBay should have bought IntoNow

Today eBay launched a new iPad shopping application that lets you shop while you watch TV. Double screening is taking over the living room, a term which is called couch commerce by eBay and PayPal.

From the Techcrunch article (markings mine):

A new “Watch with eBay” tab has been added to the e-commerce giant’s iPad app that allows users to shop a selection of items on the marketplace related to what they are currently watching on TV.

Users tap “Watch with eBay” and type in their zip code, cable provider, channel and the program they are currently watching; and using show and event-specific key word searches, the app will surface relevant merchandise from the more than 200 million listings available on the eBay marketplace.

eBay says this is just the beginning. The company plans to partner with networks, stations, cable providers and studio to identify products featured in each scene of a movie or show.

In my opinion, the tab with the Watch With eBay is a brilliant innovation in the eBay App. However, the solution for matching TV show you are watching with merchandise on eBay, could have been much simpler. Instead of a costumer needing to type in all the information about location, channels etc, the IntoNow application SoundPrint platform can be used. The application could just listen which program you are watching, and serve relevant merchandising up based on the products featured in those TV shows. You can even sell advertising on the side which matches the Advertisement blocks on TV. This way the consumer will get roadblocked!

And with regards to the large TV networks, eBay would have the cloud to make such deals happen. Much more chance to make that happen than a little start-up from some crazy Dutch!

Since I’m still long in eBay stock, I will send this post to my buddies who work in the eBay mobile team. This team is amazing, and is cranking out new innovations very fast.

I got a lesson in start-up ideas again! A good idea is not good without execution!

So will you excuse me for a moment, I’m going to read through 4 chapters of Python coding…

PS> Full disclosure, I’ve worked at eBay for 9.5 years (see my bio page), until the end of July 2011. I have never been exposed to the mobile strategy of eBay. The idea I’ve described above here has never been shared with the eBay mobile team by me. I guess the saying “Great Minds Think Alike” can be applied here.

PSS> If you try to claim couch commerce as a verb to be used with your brand, at least claim the URL.. couchcommerce.com