I know there have been a couple of companies trying to break into the Ultra Local News market, and I wonder how successful these claim to be. Seriously the biggest problem must be scalability, as for the local breaking news you need to have millions of people on the read, willing to work for next to nothing or just for free. I guess the closest Ultra Local Breaking News company I would find successful is Twitter.

What triggered this short rant tonight, other that I’m just too tired to do more serious work, is that I saw an outbreak of traffic on one old post on this blog about the bomb squad of the San Jose police on Blossom Hill Road I wrote about years ago. Seriously old news, as at the time I was living just around the corner, and snapped some pictures of what seemed a serious situation. This post, however, is still ranking on several combinations for the title. To name a few:

Here is just one screenshot of the post Ranking #1 for the above keyword! 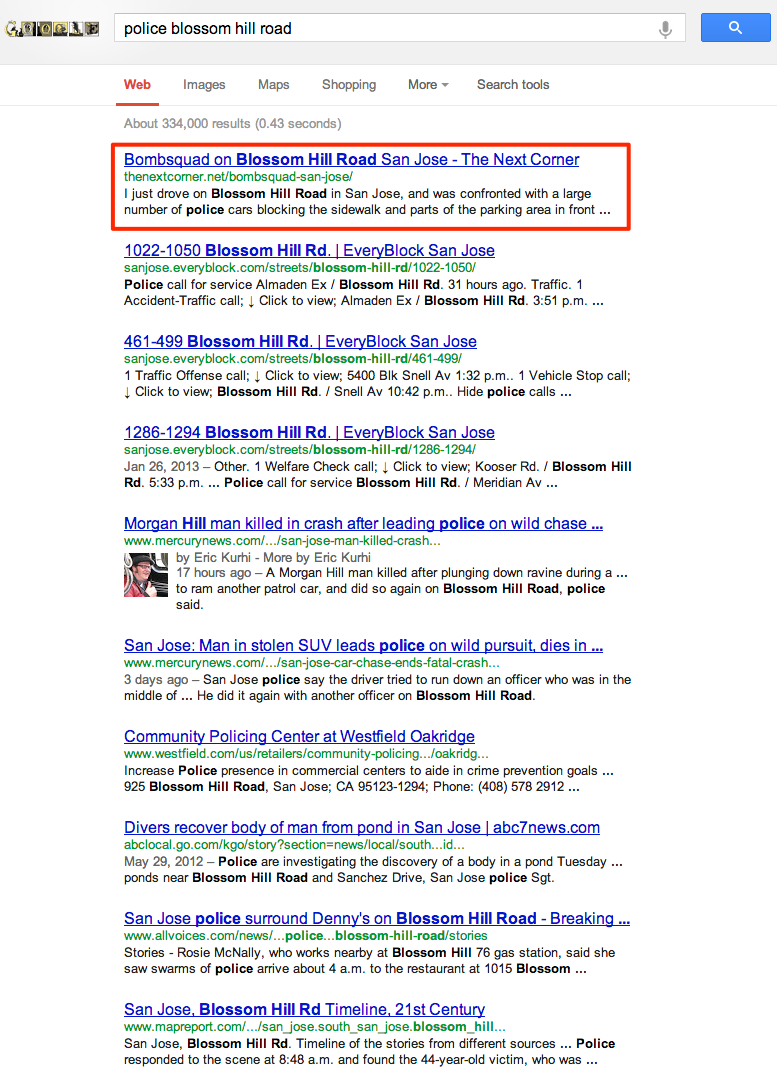 So when there is a traffic outbreak on such an old post, off course I’m interested in what actually happened….

From an article in the Mercury News:

SAN JOSE — A man who was killed when he plunged a stolen SUV down a ravine after trying to run into officers during a high-speed chase Sunday night has been identified as Adrian Gamboa, 20, of Morgan Hill.

Police said the pursuit started shortly after 11 p.m. when Gamboa, driving a dark-colored Ford SUV with the lights turned off and accompanied by two teenage girls, careened toward an officer who had made a traffic stop near Capitol Expressway and Towers Lane. The officer had to dive over the hood of a car to avoid being run down, according to police.

The officer chased the SUV onto Highway 101, then off the freeway at Hellyer Avenue, where police said the driver made a U-turn and drove directly at the pursuing cruiser, attempting “to play chicken with the officer,” according to San Jose police spokesman Officer Albert Morales.

After re-entering the freeway, the driver took Highway 85 to Cottle Road where he tried to ram another patrol car, and did so again on Blossom Hill Road, police said.

He lost control of the SUV on the 5400 block of Monterey Road and plunged into a roadside ravine after bouncing over the center median, police said.

The girls in the SUV were taken to a hospital with injuries not believed to be life threatening. Gamboa, who had not been wearing a seat belt, was ejected from the vehicle and pronounced dead at the scene. Investigators found that the SUV had been reported stolen in San Jose.

But this makes you wonder, where do people first go to learn why Blossom Hill Road had been closed? Right, the habit is hard to break, but first Google is consulted in the search for knowledge. The current state of the newspapers won’t allow to have an article up there while its happening. (With current state I mean these old media type companies are almost dying, and seriously cutting in their budgets for real time reporting). The Mercury News is just not fast enough…!

With the lack of a scalable model nor real way to make money on these kind of news opportunities, I don’t see this hole in the Ultra Local Search space filled fairly soon… or will it? What do you think..?