What a plane crashed in the Hudson river and the famous picture was published on Twitpic, the phone didn’t stop ringing for the maker of that picture Janis Krums. All the news agencies were trying to get an interview, and their main source of contacting the maker was through Twitter.

Today another horrible plane crash happened. This time there were casualties in the plane crash of a Turkish Airlines airplane near Schiphol airport in Amsterdam, The Netherlands.

Ansgar John, who I met through blogs and Twitter in The Netherlands, was driving his car and witnessed the plane crash. He jumped out and ran into the field to help people get out of the plane. In my eyes, he is a hero.

Later that day, he put some messages on Twitter, that described what he had experienced.

Saw the plane go down and entered plane to help until emergency services arrived Amsterdam Schiphol crash , lot of back injuries +/- 10 dead

Quite fast after these Tweets, the # of followers jumped: 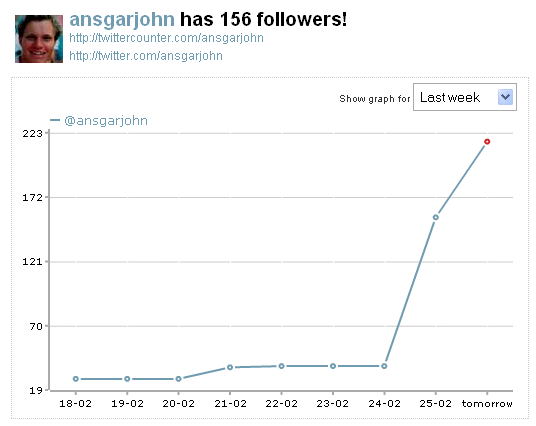 He has been contacted through Twitter by all major news agencies around the world with requests for interviews.

@ansgarjohn Hi, twittering from abc news, london– would love to hear more about your experience…can we give you a call?

@ansgarjohn CNN International are interesting in talking to you. Please can you contact me.

@ansgarjohn wondered if you might be free to talk to SkyNews about the crash?

“NOS TV live: @ansgarjohn explaining what he saw: 40 people already left the plane when I arrived.” from http://schiphol.zcapes.com

@ansgarjohn: tonight I will be on Een Vandaag Dutch television #schiphol even got twitter from Al Jazeera

The fact that Ansgar did not stayed at a distance but went into the plane to rescue and help people is amazing. Who knows what you would have done at a situation like that. The plane could have blow up! But Ansgar went in without thinking about himself.

What is interesting, is that the major news agencies are scanning Twitter to find eye witnesses of major news that just broke. Twitter is fast becoming the new rolodex for every journalist out there.

Twitter is a hard to miss tool for all media. If it comes to breaking news or getting in contact with eyewitnesses for an interview, Twitter is the tool that can help every journalist.

And off course Twitter is the subject in so many news stories right now, even in this one.