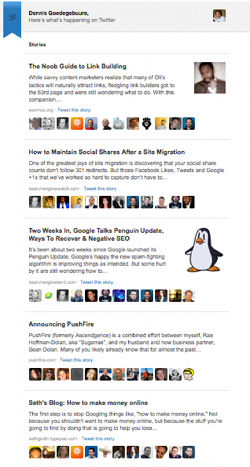 Parts of Twitters Master plan has been unveiled today, Twitter has become a data driven company, vastly becoming one of the middlemen  of the Interwebs. With the weekly email delivery of the Best of Twitter, is showing how content can be discovered through sharing by your social circle or the people you value.

More than ever, it will be important to grow the number of people following you, grow the number of content pieces you can share, grow the real connections and interactions with your network on Twitter and grow the sharing of your content through your friends. Twitter has changed as of now, as it has become more than an activity and social news stream. Twitter has become a Direct Marketing company, curating the best content tailored to you personally!

If you want more traffic from social sharing, it has just became even more important for you to focus on sharing through Twitter and get connected! Create viral content which is easily shared on Twitter, and you will get distribution for free into the Inbox of your followers and their network!

A number of building blocks have been in the works to make this happen for Twitter.

Data. First off is the large amount of data, behavioral; social and click data, Twitter has at their fingertips to play around with. As someone with some experience working with large datasets, and how data can learn how to make better decisions, I can only dream what you would be able to do with more than the firehose data the Twitter data science team has to play with.

Short URL’s. Now that all URL’s are shortened through Twitter’s own short URL, t.co, clickstream data is recorded whenever you click on a shared link. This is one of the most important building blocks for a data driven company. At least Twitter knows which links you click on, who shared these, and how thee URL’s spread throughout your network. See also this article on Twitter’s t.co short URL’s from TNW where I gave my input to focus on the data stream Twitter would be able to capture.

Tweetdeck. The broadly used Twitter client was Twitters first lab environment to try out some of the new features on the core website. Twitter short URL’s were first introduced on Tweetdeck, and I bet it is a tool for Twitter to connect twitter accounts which are managed by one person.

With Google supposedly incorporating more social signals in their algorithm, getting your content shared through social media is one nice side effect of using Twitter. However, the direct traffic from social sharing sites can be a large first advantage to go after. And now you have a third; Direct Mail through Twitter.

With the large data set, and extreme analytics, you can only imagine how these content recommendations delivered in your inbox can get better through learning from your behavior. What Subject line made you open the email, which link did you clicked on and did the friends displayed under the link had any impact on your clicking behavior.

Nice side effect for Twitter: You will spread the Tweets again, which will generate more pageviews and more sharing on their network. Slowly Twitter is becoming the toll man of the Internet… At least one of the toll men. And like Newman said; When you control the mail, you control.. Information!