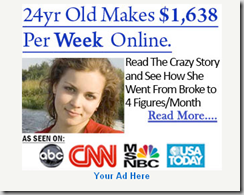 Fake TV endorsed ads, pointing to a fake newspaper site is the newest scam to lure you into taking your credit card out of your pocket and to subscribe to the most awesome get money quick program ever seen in history of the scammers.

In the ad, and on the site the ad is linking to, a number of logo’s from popular TV networks or newspapers are being mis-used. As if the system has been endorsed by these programs or journalists. 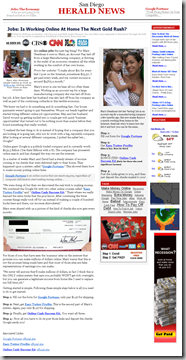 The San Diego Herald News site is not a real newspaper, it just looks like one. And although the style of the article written is really as it’s news, the site is nothing but an ad to make you buy a system that makes you post links online and make money with it…

Online giant Google is a publicly traded company and is currently worth $132.5 Billion (Yes thats Billions with a B). The company has pioneered online search and has changed the way we use the internet.

In a matter of weeks Mary and David had a steady stream of income coming in via checks that were delivered right to their home. They happened upon a system called "Google Fortune." This showed them how to make money posting online links.

Only at the bottom there is a large disclaimer, explaining the site is not a real news site, but nothing but an advertisement for the automatic money making system Google Fortune.

I hope Google will bring the hammer down on this program for misusing their brand.