After following my friend and ex-colleague Alex presenting on Facebook Ads on the Affiliate Summit through Twitter, I though I might give the Facebook Ads a try myself. As Alex mentioned, Europe has got some virgin waters laying ready to be explored by smart Internet marketers. Thank god they have not showed up yet, as I can try to learn that Shit comfortably without being priced out of the market.

Signing up for the Facebook Ad program is a breeze,  easy & fast. The only problem; in The Netherlands Facebook is a far second or even third when it comes to social networks. A Local player called Hyves has got around 70% of the Internet population signed up and hooked to the drugs that is called Hyves (read here all about Hyves in Businessweek).

With Valentines day coming up, I thought I should do something around this in my Ad. Flowers always are being bought by men at the latest moment just to make the GF/wife happy enough that they get lucky.

I’m targeting men age 22 and older who are interested in women and are single, in a relationship, engaged, or married in the Netherlands who like Flowers or Valentine. 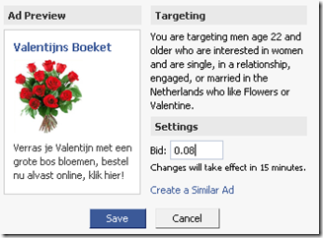 Unfortunately, with the ad targeting I set up, the group that I’m targeting is fewer than 20 people.

I have to say, the Facebook platform is pretty slick when it comes to reports, and I can see the hand and thinking of Alex in the decisions that have been made . He is an all star Affiliate champion, and very smart guy!

The report can be segmented by:

With a summary on campaign or Ad level.

Unfortunately I’m still waiting for my first click. I just had 6 impressions, so I cannot really say anything about the success of the Ad platform. Even on another Ad that I set up around travel to San Francisco, I had 800 impressions but no clicks. I guess I will have to beef up that Ad with a picture.

All in all, an interesting learning experience on the Facebook Ad platform. I hope they will grow their network in The Netherlands, so that I can test more on there.