I won’t deny it, I’m a Techmeme junky. Every morning, and during the day, I check what are the latest headlines in the world of Tech News. And although I stopped reading Techcrunch by going to the Techcrunch homepage and picking a story, I end up a lot of times on an article on Techcrunch, TheNextWeb or The Verge through Techmeme. So when Gabe Rivera published a post around the biggest (i.e. tallest) stories of 2012, my first expection was to see the sites which make up the top of the Techmeme Leaderboard to take credit for breaking the biggest techstories of 2012. To my surprise, hardly any of the top tech stories on Gabe’s list of Tall Tech Stories were from the websites which sit at the top of the Techmeme Leaderboard.

Techcrunch in the Lead – Techmeme Leaderboard 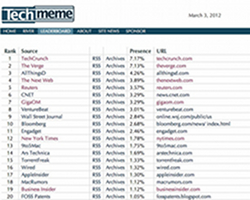 For years, Techcrunch have been holding the #1 position on this leaderboard. It has been a close call one day in March this year, where The Verge almost took the top spot. With just 0.04% difference, Techcrunch held the top spot of the Leaderboard (click the screenshot on the right for large image of the LB from March 3). This screenshot of the small difference between #1 & #2 was made on March 3 2012, which was the period Techcrunch lost a number of main contributors, editors and executives.

Only 0.04% difference, however, Techcrunch got their act together, and started to increase the lead again, where the AOL site ended the year with a comfortable lead, and % of top headlines well above the 10%. Meanwhile, The Next Web, a technology website started a little over 5 years ago, have shown a gain in coverage, and have been on #2 for the last couple of weeks. (disclosure, The Next Web was started by two of my Dutch Internet Friends, Patrick & Boris, and I’ve helped the editorial team here and there in stories, like here, here and here, and even got a guestpost published back in 2010)

How do get these technology websites featured on Techmeme Leaderboard? According to the explanation of Techmeme about it’s rankings:

Sources are ranked by Presence, the percentage of Techmeme headline space a source occupies over the 30-day period. “More” links are not taken in to consideration here — only full headlines are counted. For more information, see our original announcement from long ago. 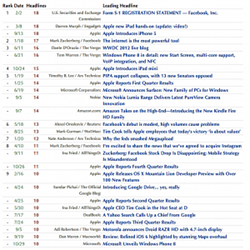 In his blog post, Gabe already points out how the Techmeme Leaderboard websites have not been well represented as the leading headline for the tallest tech stories.

It’s important to understand that each headline shown here is just the one that happened to be the leading headline when its cluster reached the maximal size. So these headlines don’t always indicate the most representative story of the bunch, the best summary, or the most cited story…

So when the tallest Tech Stories are announcements from the larger Tech companies, mainly Apple, where do the % of headline visibility for Techcrunch, The Next Web and others come from? Yes, covering these announcements.

At the latest Apple announcement, I believe it was the iPhone5 announcement, I counted the number of articles written by Techcrunch. I believe the editors published more than 15 articles on the announcement.  A couple of years ago, when I enjoyed reading the full website from Techcrunch, all these announcements were published into one single article. Now you will have to flip through multiple articles to get all the details you would like to see.

We are living in a world where more and more Internet Journalists are becoming accountable for the number of pageviews they generate. Having worked at a Tech Media company, where the number of pageviews is directly linked to the revenue the company makes through advertising, I know the pressure of pumping pageviews. Mo Pageviews, Mo Money.

So the company can either pursue Pageview Journalism, like Mashable & Business Insider are pumping Slideshows, where the top 20 lists are spread over multiple pages, or the company can pursue what I call Headline Journalism, spread the actual news over as many articles all with a catchy headline. Push these on the social media streams to grab the attention of the news consumer with the headline, when they click on the link in their Twitter stream or Facebook Newsfeed, Voila, you just printed another Pageview!

I stopped reading Mashable for their abuse of the Pageview Journalism techniques. I can’t look at any more slideshows with a top 10 list. I don’t want to waste 5 minutes of my time to flip through a number of pages just to find out who is at the top of another lame list. That is 5 minutes I will never get back.

The Headline- & Pageview Journalism as I described here, can be called the Fast Food of Technology News. You consume it fast, it’s cheap to make, and you’re not getting a whole lot smarter from it, as you might get hungry again in a couple of minutes…

As people get overloaded with news, too many signals from the social streams and the need to flip pageviews to get the real, full story, I expect more readers to turn away from this kind of journalism, and will start searching for, and sharing more in depth, high quality writing, where the research and time invested in writing the article is worth their time.

So writers of the Technology websites featured on the Techmeme Leaderboard, Please write something that is worth my time. You are getting 5 minutes of my life, think about that!

The problem is, who will pay for all these writers who spend more time writing good Sh*t? Because time on site has not paid any of the bills…yet!