After seeing this Tweet from Boris, I knew he is up to something. Boris is one of the founders of Twittercounter (full disclosure, I know Boris!).

Earlier this week, Boris Tweeted that the price of the featured spot on Twittercounter, currently $249 per week, would go up. From the site:

We receive a lot of requests from people who want to become a featured user so we decided to start charging to pay for our hosting costs. Being featured on all our pages gets you a lot of traffic and followers and can be an easy way to grow your online popularity.
We currently charge $249 a week to become a featured user and plan to increase that as we get more traffic and users. We currently track 1.1 million usernames and generate 11.000+ pageviews a day. The featured users is displayed on all pages at TwitterCounter.

The featured spot on Twitter counter is really simple, anybody who is featured can count on a huge increase of followers. After the week, you will be able to spam all these people with some affiliate crap or your sorry ass companies marketing message. Only to find out that the new followers have un-followed you after they get bored with all the crap that shows up in their feed.

Check out the growth in followers of the current featured Twitter profile, going from 248 to 547: 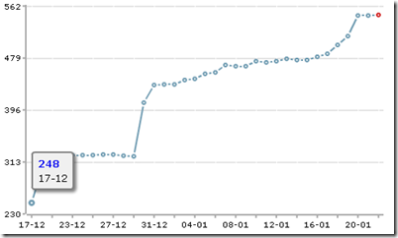 As long as you are willing to spend money on getting followers on Twitter, featured profile on Twittercounter or your own Twitter Adsense campaign, Just make sure you keep your followers by adding value to the conversation. Don’t be a dick!

And if you do add value on Twitter, you will see that you start to build connections and get value out of the conversations. When the conversations become more insightful, you will see that more people start to follow you. and the best thing is; you did not even have to pay for these friends! This way you get value for the money you spend on getting the first couple of hundred followers by spending money on them.

PS> It would be interesting to see a list of all the past featured profiles. Then you can track how much value these people have brought to the conversation just by looking at their # of followers. Did they loose them, or were they able to grow their tribe even faster?