Last week, we got a notice our number of the house was newly painted on the curb stones at the street again. The notice was from Student Curb Service, where they highlighted the curb stones were freshly painted for convenience of police and fire department in times of need. 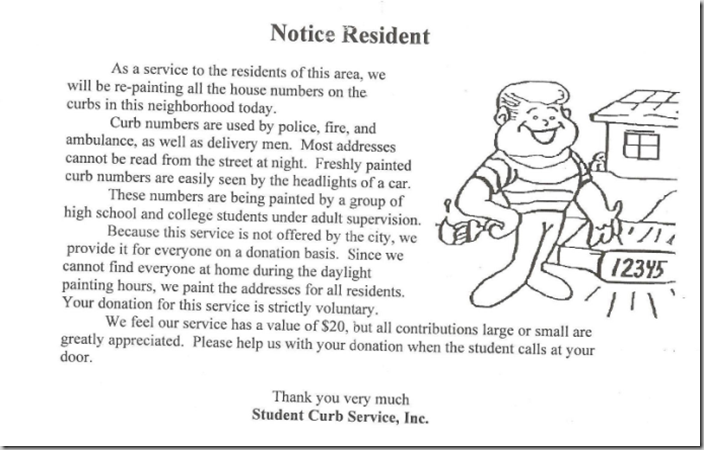 All sounds good right? Your house need to be identifiable when needed, and students need to know what an honest job feels like…Like they say:

Curb numbers are used by police, fire and ambulance, as well as delivery men. Most addresses cannot be read from the street at night. Freshly painted curb numbers are easily seen by the headlights of a car.

Because this service is not offered by the city, we provide it for everyone on a donation basis. Since we cannot find everyone at home during the daylight painting hours, we paint the addresses for all residents. Your donation for this service is strictly voluntary.

Only, we got the exact same notice only 3 months ago in our mailbox, where I don’t see any changes to the paint of the number on the curb stones. Is this a scam or legit? So far we have not paid anything, but should we pay these poor students or would our money be spend on all other things except on education?

Anybody know if this is a legit operation?

”Students” have shown up at my door roughly every four or five years collecting for painting my number on the curb. And I used to give them money. Not any more. That’s because the roots of the big eucalyptus in front of my house have pushed up the street just enough to allow an occasional puddle to form, which covers and discolors the number. But you don’t have to pay for this service which, most likely, is conducted illegally.

The other day I came home and there was a note taped to my door saying that as a service to the residents, numbers will be painted on our curbs. This is nothing new, but because I have large, clearly visible numbers on my house, I have never wanted the number painted on the curb.
The last time they did this was probably a few years ago and when they came to collect (donations), I told the man that I had not wanted it painted and, therefore, would not be paying for it. He was visibly irritated but left without saying anything. When I saw this note I decided to call and tell them ahead of time that I did not want this service. They say it has a value of $15 and that they will take all contributions and to make your donation when the ”student” calls at your door. I can tell you for sure that the person who was collecting last time was no student!