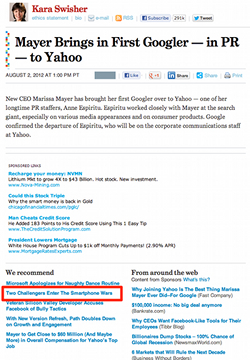 How to loose some credibility in the technology your site is running on. Clicking on a We recommend link under the article Mayer Brings in First Googler on AllThingsD, brings me to an article from 2006! Really.. You are sending me to an article from 6 years ago! I was intrigued by the title in the link: Two Challengers Enter The Smartphone Wars. (link)Wouldn’t that be something if all of a sudden two new players entered the smart phone market in the year of 2012!

No, AllthingsD thinks it relevant for their readers right now to re-read the article on the smartphone market from 2006. Like as if Palm and Blackberry are still the major market leaders these days!

When it comes to smartphones that have a full keyboard and good email capability, Palm’s fast-selling Treo is the best. New devices are constantly being announced in hopes of becoming the “Treo killer.” Most of these challengers use Microsoft’s Windows Mobile software, formerly called Pocket PC, which was designed to evoke the Windows computer experience on a hand-held device.

I guess the technology this block is running on needs some tweaking to avoid serving up articles years and years old. I tested to see if it was a one time bug, but time and time again, old, not even related articles were served up. Some of the old news can still be relevant, but 9/10 times the articles is just a complete waste of time for the reader.

It should not be that difficult for the engineers of the WSJ, parent company of AllthingsD, to write a small script, only picking articles which are recent to recommend. Unless it is the objective of these recommended links to drive traffic and clicks to the old articles. But that would be IMHO showing a complete disrespect for their readers, as the time you waste reading an article from 6 years ago, is wasted and can never be given back!

What do you think..? Waste of time to read how two new challengers entered the smart phone market back in 2006, or still relevant?