Home » Pepsistuff.com – Traffic or Blow Me…!

According to Comscore Amazon is getting a lot of traffic from a group of keywords around Pepsistuff. 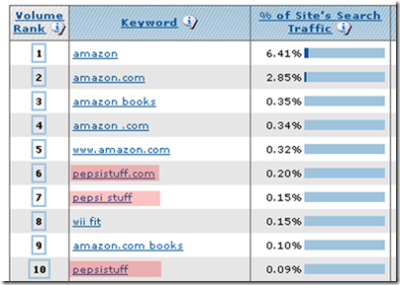 So naturally I was checking what kind of product that is… It appears that you could have collected points since February this year and redeem the points for MP3’s.

Pepsi and Amazon.com are teaming up on Pepsi Stuff, a massive collect-and-get program where consumers can download the most DRM-free MP3 music available anywhere. Four billion specially marked Pepsi packages will allow people to collect points and redeem them for music from Amazon MP3 that can be played on virtually any digital portable device (including iPod(R)), organized in any music management application, or burned to a CD.

Beginning February 1, consumers purchasing Pepsi products can “bank” their points on PepsiStuff.com and redeem them for music on Amazon MP3.

As the special action only last a couple of days this year, people will be trying to redeem their points. As you can see from the Pepsistuff.com Trends below, people are searching most for Pepsiestuff.com and then pepsi stuff. 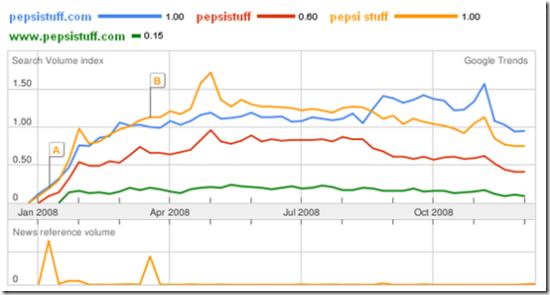 The promotional codes can be found on the Pepsi packages.

During the Promotion Period, or until supplies are exhausted, whichever comes first, each specially-marked package of Pepsi-Cola products and certain fountain cups will include a unique ten (10)-character alphanumeric code (each, a ?Code?) worth Pepsi Stuff Point(s). Each Code is worth Pepsi Stuff Points based on the package size in accordance with the table below.

During the Promotion Period, or until supplies are exhausted, whichever comes first, look for Codes inside specially-marked cartons of Pepsi, Diet Pepsi, Caffeine Free Pepsi, Caffeine Free Diet Pepsi, Pepsi One, Wild Cherry Pepsi, Wild Cherry Diet Pepsi, Diet Pepsi Max, Diet Pepsi Lime, Pepsi Lime, Diet Pepsi Vanilla, Jazz Black Cherry French Vanilla, Jazz Caramel Cream, Jazz Strawberries and Cream 12-pack and 24-pack cans. Also, Codes can be found under the cap of specially-marked 20 oz., 24 oz., 1-liter and 2-liter bottles of the above-mentioned Pepsi products and, in certain participating markets, on specially-marked Pepsi fountain cups available at participating locations during the Promotion Period or until supplies of specially-marked packages are exhausted, whichever occurs first. Not all brands and package sizes may participate or be available in all areas. In addition, Sponsor reserves the right, at its sole discretion, to introduce new products and/or package sizes which will contain a Code and may have a different Point value than listed above.

There are more places on the web where you can redeem pepsi stuff points. Xomba.com is one of these. Below here you see where people ended up after they searched for pepsistuff.com. 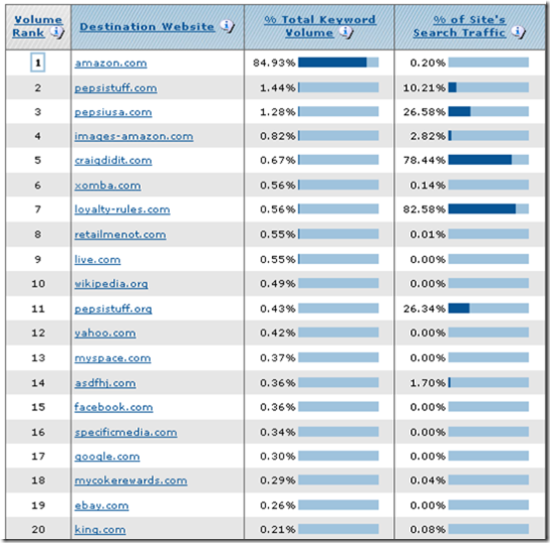 It’s interesting that the site Craigdidit.com is getting almost 80% of their traffic through this keyword. If we look at the site, we find the following post: MyCokeRewards vs. PepsiStuff.

I?ve been thinking about a quick and probably oversimple financial analysis of the benefits of the MyCokeRewards.com and PepsiStuff.com rewards programs. I?m typically more of a drinker of Coca-Cola products?mainly Coke Zero and Powerade (after kayaking or cycling)?and have participated in that program for much longer, but the affiliation of PepsiStuff with Amazon.com and the ability to buy music there with the points has gotten me interested in that program as well.

So Craig is writing a blog about the Cola war point collections. Apparently Craig did something right with his post, as he got a bunch of traffic to his blog thanks to Pepsistuff.com.

Also Loyalty-rules is getting even more of their total traffic through one keyword: Pepsistuff.com. Loyalty-rules.com has made a page explaining the loyalty program from Pepsi. Probably they have found out the traffic on that particular page was pretty high, as the site is plastered with Adsense 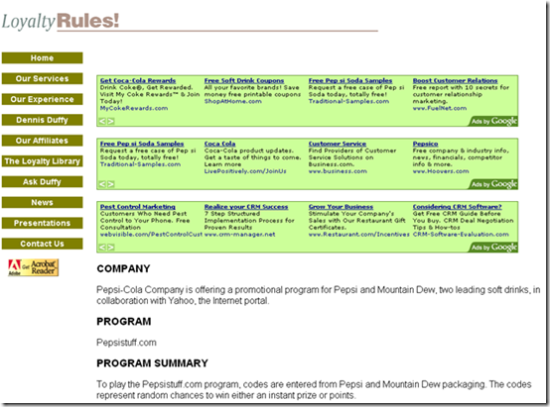 This program has the right combination of elements for a consumer goods program. It includes a game of chance, a promotional currency and an on-line interactive element. The key to long-term success with a program like this is what Pepsi does with the information they collect. It is imperative that they use this opportunity to cultivate a relationship with the customers that enroll in this program.

BTW> If you are searching on Google for Pepsistuff.com you will also find a piece on the rip off report site. Amazon.com Shame on Pepsistuff.com

Have been waiting for Pepsi to re-stock (Amazon.com) PepsiStuff.com hoodie sweatshirt
which was free+175 pepsi point. After re-stocking last week 8-08 we now have to buy the shirt for 79.99 thru Amazon.com! This shirt was in high demand so is this the resaon we now to to BUY and not use the point saved after we purchased Pepsi products, this is just wrong, shame on you!

Jon saved up a bunch of PepsiStuff points and decided to redeem them for an item PepsiStuff is promoting on its website...

PepsiStuff.com apparently thinks otherwise?they’ll let you redeem the points for a COBY player (ha ha ha ha), but the Sony alarm clock is just redemption bait. You’re not supposed to actually pick that.

You can read the whole story and the response Jon got from Amazon on the consumerist.com site on the link above here.

Good to know: we can add Pepsi to the list of companies who’ve engineered their customer service departments to be insatiable maws, in which every complaint and question is devoured without resolution.

Nowdays brands and the way they treat their costumers are much more exposed to the public eye. They cannot hide anymore. Every mis-communication can be posted online for all to see, and you got plenty of sites like rippoffreport.com or Consumerist.com.

The way a company is treating complaints or just rands on the Internet will determine success in the future even more.