Sometimes, the Internets can be a wonderful community of friends. Case in point, TheOatmeal raises more than $20,000 in just 64 minutes for the National Wildlife Federation and the American Cancer Society under the name Operation BearLove Good, Cancer Bad. For a couple of hours, the site to make donations and TheOatmeal itself were unable to reach due to high traffic. The background of the story is copyright, and the theft and republishing or something of TheOatmeals comics. FunnyJunk threatened to sue TheOatmeal for $20,000 in damages for defamation. Instead of paying the $20,000 to Funny Junk, TheOatmeal promised:

I don’t want to write retorts like this anymore

I Just Want To Make Comics

And with that, an avalanche of support was breaking out, raising the $20K in just over one hour, which in itself is not that strange if the story is ranking #1 on the Reddit Homepage:

It appears that FunnyJunk does not like the two pages from TheOatmeal ranking just under his site for his brand: 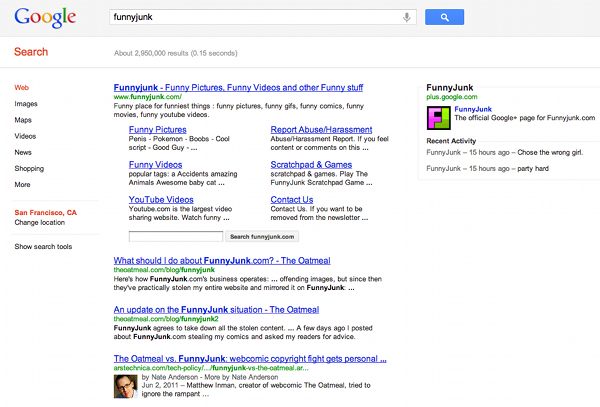 Ouch for FunnyJunk. I guess you don’t piss off The Oatmeal! The power of the Internets!

Here are the links to the earlier stories: