My interest in this story was peaked again through a sudden break of the normal traffic trend on that old post (at the bottom of this post I posted an image of the traffic). Here it is, the story about a vintage Levi’s Jeans from 1890 being sold on eBay for $36,000 finds its way to a tweet:

Someone actually spent $60,000 on a pair of Levis that were made in 1890! I didn’t even know Levis had been around that long. That is nuts!!

How Content Farms use Old News to Generate Traffic

It looks like the Tweet was inspired by the intro from a story ran by the Atlantic, which was featured by the Yahoo Finance section on March 31st. See screenshot below here, where I have to say this is probably not an attempt to be funny for April 1st fool day! 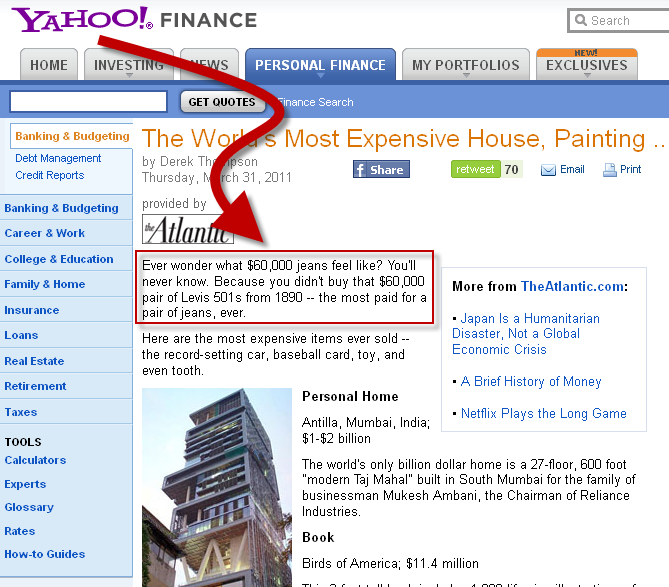 The tweet was picked up by a Cincinnati Examiner blogger, who wrote a story about the Levi’s jeans that was sold and the history of Levi’s. The $60,000 Levi’s Jeans is used to write an intro for a piece of text which reads more like a history of the Levi’s company than some real journalism. Just look at how the author is jumping from the story of the $60,000 Levi’s Jeans into the history:

The world’s most expensive blue jeans went for 60 grand and were sold by a man named Randy Knight to an anonymous collector in 2005 on eBay.

In fact most people are not aware that the Levis jeans company has been around since 1873. In 1853 a 24-year old German man by the name of Levis Strauss came to America…

The story continues to mention some random Levi’s Strauss facts and company history, where it is ended with a random quote that Levi’s Strauss is one of the most popular denim brands in the world.

Not only is the whole article just a written form of historical facts about Levi’s Strauss, it also contains facts that are plain outright wrong. I checked the original listing in the eBay database (item # 160264665680)! The mistakes in the story are:

One might wonder why the editor of the story is using old news to create new news? IMHO the whole story smells like a Farmer. I don’t mean farmers smell bad or something, but more refers to the Content Farms!

I guess they are fitting that Panda/Farmer profile perfectly with the post about some old jeans being sold on eBay!

For a short time I got an outbreak of traffic on my old post about the pair of Levi’s Strauss Jeans sold on eBay. The outbreak was probably due to an increased interest from readers making searches on Google, where my article was ranking high on a number of keywords like: 1890 levi 501 jeans; levis 501s from 1890; 1890 levi 501 jeans sold on ebay.

I say was ranking high, as the SERP’s is now polluted with scraper sites, echo chamber blog posts and other “News” sites posting about the Levi’s Jeans which was sold for $60,000… 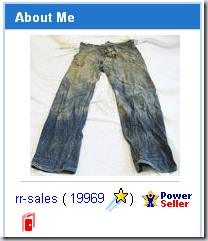 Oh and by the way, in case you were wondering what a Levi’s Jeans from 1890 might look like, here is the image which went with the eBay auction back in 2005: