Last week I came across an article on Business Insider where a picture was being used as a metaphor to make a certain point even stronger. While reading the article on my iPad in the Muni on my way to work, the picture kept triggering the thought how tasteless the choice of using this image to make a point actually was. Spending some more time researching the actual image, I discovered a story behind the image, where I believe the article on Business Insider does not fully cover the load of the image being used here. Furthermore, it is a shame Business Insider is not linking to the source of the picture, or where they found it!

Here is for an interesting story of my research…

How Steve Ballmer Made Microsoft A Better Company Since Bill Gates Left is the article in Business Insider I was reading (here is the link). On the web, this article is being spread over multiple pages, as the annoying slideshow to pump the pageviews, however on the iPad the full article was on one page (at least in the Google Current iPad App).

The picture, which accompanied the paragraph how Steve Ballmer is quick to pick winners and kill products that aren’t working, especially if they serve no larger strategic purpose, is displaying a scene of one man, blind folded, with a firing squad ready to execute the man. 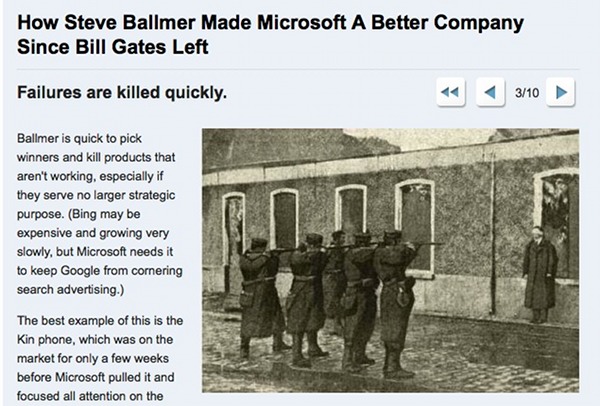 When I saw the picture and read the paragraph, first I was shocked this historical picture was being used to make the authors words more powerful. Soon after this my thoughts turned into a disgusted feeling. Really Business Insider, is Ballmer killing unsuccessful projects like a firing squad is killing men in what it looks like a war situation. Without knowing where this picture was originated, what the story behind the man who was going to be shot and killed was, I couldn’t help to think about the poor man being a unsuccessful in life and being killed because he was a failure. At least that is the connection my brain made when I saw the image placed next to those words.

In Search of a Story Behind an Image

I wanted to know more about this picture. As I grew up in The Netherlands, I had my fair share of history lessons when I was younger.. The second world war, and the German occupation of The Netherlands is a topic which is being taught to great detail in schools. My grandfather was in the military when the war broke out, and was detained by the Germans for 5 years, from when he was 20 to 25 years old. I regularly heard stories about the war, and how people had to survive, or were suffering. Seeing the above picture of the firing squad executing a lone man, made me think it might be a picture from the second world war.

If that was the case, there actually could still be relatives be alive from both the man who got killed and the men who shot him. Not very politically correct of the Business Insider to pick this image for a story on how Steve Ballmer kills unsuccessful projects at Microsoft! I had to know where this picture came from!

I posted a question on Quora to see if anybody could help me find the original source of this image, after which I posted the same question on Twitter with a link to the question on Quora.And what do you think, it just took 4 minutes and I already got an answer with a lead to a wikipedia page the picture was featured on.

@TheNextCorner bit.ly/A2YzcJ translate that page, a small snippet is given there 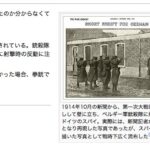 Now that is the power of Twitter. Joshua had used the reversed image search engine tineye.com, which found 48 sources for the same image.

I quickly copied the url into my Chrome browser, as the URL was for a Wikipedia page in Japanese. Although pictures on Wikipedia usually are donated or copied from other places on the web, this might not be the end of my search, but at least a good start. The reference of this picture carried a link to a website about the great war as World War 1 is being called. The picture was hosted on a page about the ‘Stories of War Photographers‘.

This narrator tells of his experiences with the spy hunters of Belgium. He was swept into the war-stricken country where he was arrested by the Germans, sweating under the German third degree, spending a fearful night on a prison floor, suffering with his fellow prisoners the torments of a trial as a spy in a German military court in Brussels, and finally securing his liberty. He has collected his experiences in a volume under title “In the Claws of the German Eagle,” thus preserving in book form his remarkable articles which were first published in ‘The Outlook’.

The stories on the page are interesting, where these tell the story of an American war photographer in Belgium during the first world war. The Belgiums soldiers were happy to put up a scene for the photographer to make his shots, far from the actual fighting (at least that’s what this photographer has written down).

Under the command of the photographers, they charged across the fields with fixed bayonets, wriggled up through the grass, or, standing behind the trenches, blazed away with their guns at an imaginary enemy. They did some good acting, grim and serious as death.

At one moment, the story is getting really interesting:

While his little army rested from their manoeuvers the Director-in-Chief turned to me and said:

“Wouldn’t you like to have a photograph of yourself in these war-surroundings, just to take home as a souvenir?”

That appealed to me. After rejecting some commonplace suggestions, he exclaimed: “I have it. Shot as a German Spy. There’s the wall to stand up against; and we’ll pick a crack firing-squad out of these Belgians. A little bit of all right, eh ?”

I acquiesced in the plan and was led over to the wall while a movie-man whipped out a handkerchief and tied it over my eyes. The director then took a firing squad in hand. He had but recently witnessed the execution of a spy where he had almost burst with a desire to photograph the scene. It had been excruciating torture to restrain himself. But the experience had made him feel conversant with the etiquette of shooting a spy, as it was being done amongst the very best firing-squads. He made it now stand him in good stead. …

…A week later I picked up the London Daily Mirror from a news-stand. It had the caption: 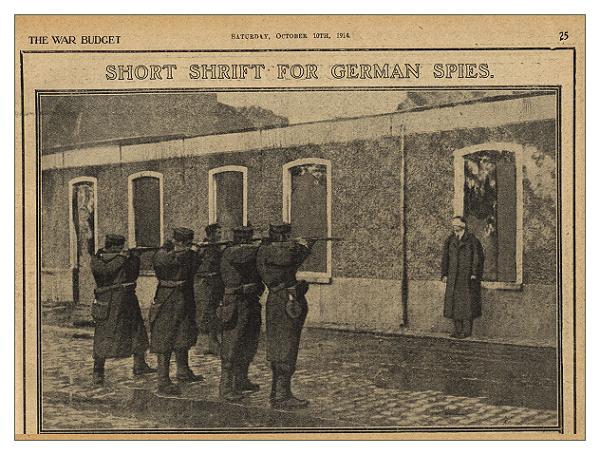 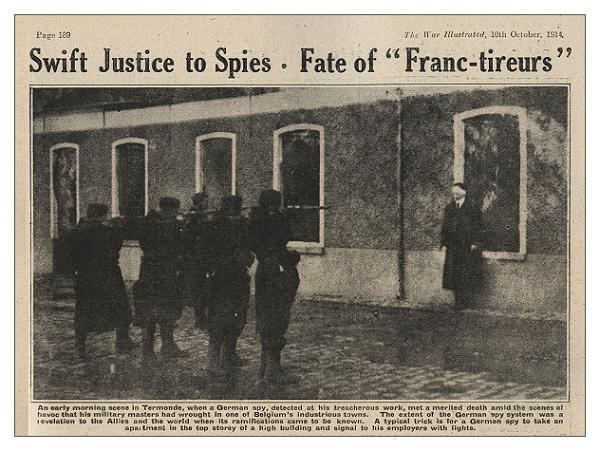 I opened up the paper and what was my surprise to see a big spread picture of myself, lined up against that row of Melle cottages and being shot for the delectation of the British public. There is the same long raincoat that runs as a motif through all the other pictures. Underneath it were the words:

“The Belgians have a short, sharp method of dealing with the Kaiser’s rat-hole spies. This one was caught near Termonde and, after being blindfolded, the firing-squad soon put an end to his inglorious career.”

One would not call it fame exactly, even though I played the star-role. But it is a source of some satisfaction to have helped a royal lot of fellows to a first-class scoop. As the “authentic spy-picture of the war,” it has had a broadcast circulation. I have seen it in publications ranging all the way from The Police Gazette to Collier’s Photographic History of the European War. In a university club I once chanced upon a group gathered around this identical picture. They were discussing the psychology of this “poor devil” in the moments before he was shot. It was a further source of satisfaction to step in and arbitrarily contradict all their conclusions and, having shown them how totally mistaken they were, proceed to tell them exactly how the victim felt. 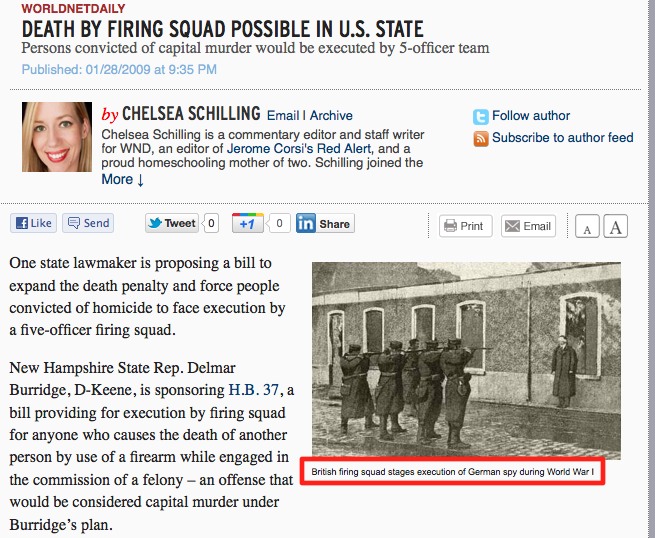 So here is the kicker…

The man in the picture was not the real spy, didn’t die due to the firing squad, and lived to see the same picture in the newspaper, while now, almost 100 years later, the picture is being used and  referred back to as a scene from WW1 here: Death by firing squad possible in the US (on WND.com).

But the picture is not only used for serious news articles, in all shapes or forms this picture is being used to make a message of a story stronger.

Here is an article in which the Jackson School Board seeking volunteers for the budget committee. I guess volunteering for a budget committee is the same as suicide through the firing squad! 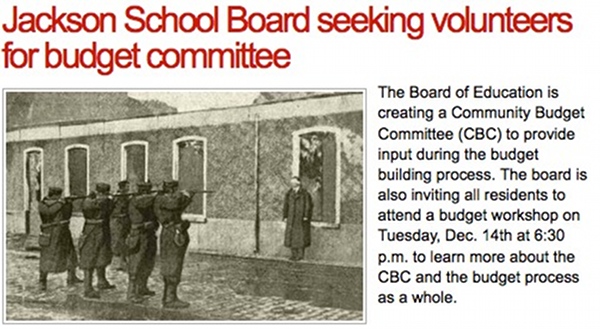 Volunteering almost means the same as death by firing squad

Or how abut this one, on the fact that people need a reference letter from their professor at the university, and only dare to ask with a lot of apologies. 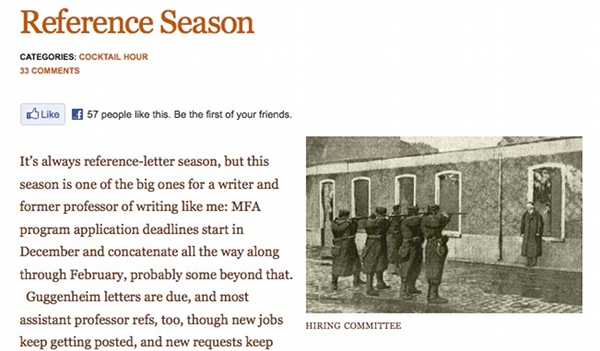 I need a reference, please don't shoot me

In a forum, discussing the Fort Hood shootings, the people who post a comment do have an explicit request: the shooter should be facing a firing squad! 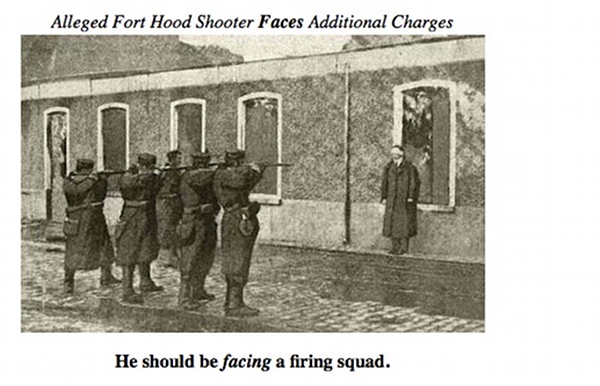 In Utah, an inmate; Ronnie Lee Gartner, choose the firing squad as the method to be executed. The Salt Lake Tribune published an article on how this might impact tourism to Utah. And rightly so, the PRWatch editor asks a valid question:

Given the highly contentious nature of use a firing squad in the first place, one would expect coverage of this news to focus more on the barbaric nature of this practice.

The most outrageous usage of this firing squad photo from WW1 I could find was were the picture was published next to an article to call people to get their H1N1 flu shot (H1N1 vaccine liquidation sale now on: Hurry while supplies last!). The picture was edited, and had a large tagline overlay saying: Get Your Flu Shot! As if the soldiers in the firing squad are firing a medicine injection to protect the “spy” from getting sick from the H1N1 virus!

Get your flu shot through a firing squad

Back to Killing Unsuccessful Projects at Microsoft

I guess my outrage over the picture of a firing squad in relations with Steve Ballmer killing unsuccessful projects quickly on Business Insider, was at first a little overreacting now that I know the scene in the photo had been staged. The newspapers in the UK during WW1 placed the photo as if the photo was from the actual scene.

I’m sure the photographer of the picture never dreamed the actual copy would be used in all the above examples on how to make a story stronger by using a metaphor picture. let alone the man who played the German Spy being executing through the firing squad!

Furthermore, this example of a picture from the front, tells a strong story of propaganda, and how this is being used to influence peoples opinion. Not everything you see in the news or the newspaper is true, there could be more powerful forces behind it the story to push their point and getting things done!

I just hope I will never have to face a Steve Balmer who is ready to pull the trigger on any of the projects or companies I’m working at! I don’t want to face the Microsoft Firing Squad!