While working the streets of New York with my camera, looking for fun and interesting stuff to make pictures of, I came across this billboard on the edge of Soho and Chelsea. It is the Jello Pudding Face mood meter. The billboard is showing the mood of America on Twitter by tracking the number of 🙂 vs 🙁 in percentages. 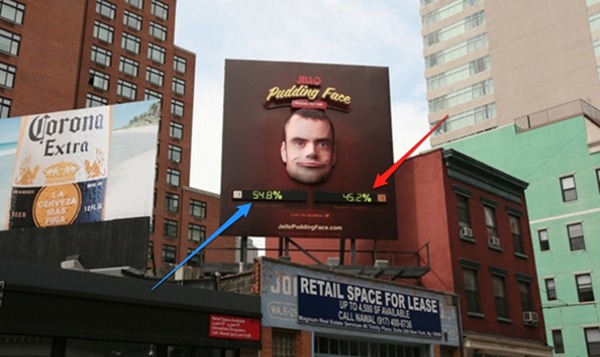 With the billboard comes a special website for the Mood campaign: Jello Pudding Face

We’re tracking tweets for the most accurate gauge  of America’s mood ever. If the mood gets down, we give away pudding  to fix it. 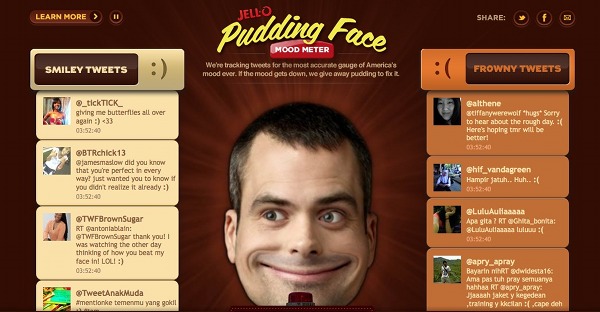 Is America happy? Or sad? It’s always been impossible to accurately gauge how America is feeling at any given moment. But now the mood of the country can be measured in real time, thanks to the JELL-O Pudding Face Mood Meter. We monitor Twitter, constantly searching for smiley-face and frowny-face emoticons. Then, we use the results to measure the mood of the nation. Any time it starts to dip, we quickly deploy free pudding to the frowners via Twitter to bring our collective mood right back up again.* And before you know it, all of America is sporting a great big Pudding Face.

This campaign is focussed on making everybody happy in the US, where Jello Pudding apparently makes you smile. I would like to get me one of those happy faces… I just like the interactive billboard hooked up to the Twitter screener of the happy vs sad smilies. Very creative!