After having played with the iPad myself, after I got one as a present from my wife, I’m totally hooked. What an awesome machine. It appears there are more people around the world who want to play with the newest gadget toy, as Edible Apple is reporting. Read more on Techmeme here. People from around the world are bidding on iPads on the US eBay site.

The iPad is the latest and greatest from Apple, and for the time being, it’s only available in the US. But come on, folks, the international iPad rollout is just a few weeks away. So why in the world are some people paying as much as $5,000 to have an iPad shipped to their corner of the world? One customer from the U.K reportedly spent $5,500 for a spankin’ new iPad.

This triggered me to look at the number of searches placed on eBay.com for the keyword “iPad”. Obviously you can see three important surges of search traffic of people looking for the product: 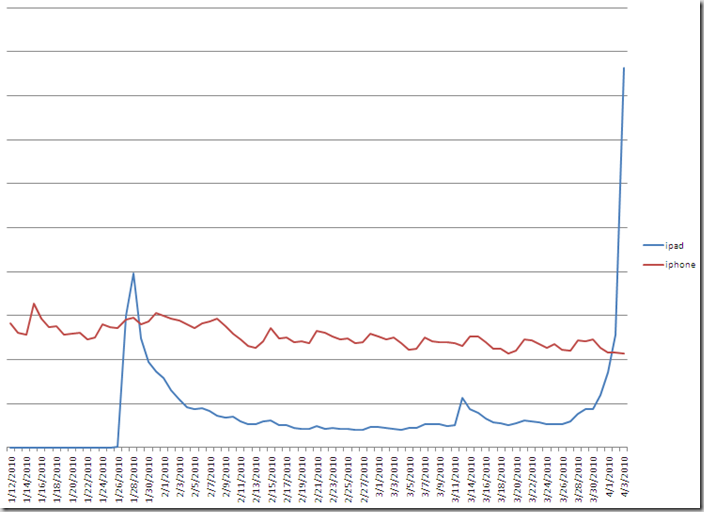 In the marketplace economic theory, Demand and Supply will always be equal in the perfect marketplace. However, as the iPad is not available yet in other countries but the US, the demand for the item oversees pushes the price up on the US based iPad marketplace.

Supply and demand are always equal as they are the two sides of the same set of transactions, and discussions of "imbalances" are a muddled and indirect way of referring to price. However, in an unmeasurable qualitative sense, demand for an item (such as goods or services) refers to the market pressure from people trying to buy it. They will "bid" money for the item, while sellers offer the item for money. When the bid matches the offer, a transaction can easily occur.

So get your Apple iPad from your local Apple store right now, and list the item on eBay for shipping worldwide, and capitalize on the opportunity. You can list 8 iPads per week! (Announcements).