I still have my old Commodore 64 somewhere. The old home computer on which I played so many games. I unfortunately never learned how to code anything on that old little machine. I might have been in a whole different place right now if I did start. I guess I was too impatient at the time. I’ve always been in need for speed. And even the commands “Load, Press Play On Tape” were almost too much, as it followed with 4-5 minutes of loading a game using a tape recorder.

But one thing stuck with me since the Commodore 64; computers are changing the world. And because I grew up with the tapes in computers, old floppy drive and later the Zip drives, my perception of technology is shaped based on these paradigms. 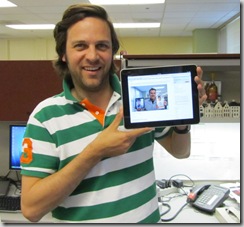 Now that I have my iPad, there is something fundamentally changing I know for sure my kids will grow up in a different world. A world where we are always connected, a world with apps, either free through advertisement or paid, and a world with touch screens.

I got the iPad as a gift from my wife, and she can tell that I’m very happy with it. I never interrupt one of her favorite TV programs anymore, I make her hot chocolate when she asks me to, and I’m more quite than before. All because I’m busy enjoying my iPad…

Things that I’m missing on the iPad:

I’m sure there will be more things I miss on the iPad, the more I use it. But for now, the iPad is my new favorite toy!

BTW> most iPads on eBay these days are being sold to buyers outside of the US at a ~$150 mark up over retail. Still a chance of making a profit!