With the launch of a new city in the Neighborhood project, Los Angeles, Airbnb just launched the largest number of city Neighborhoods so far, 61. I really enjoyed day dreaming with the great pictures of Neighborhoods like Malibu, Santa Monica, Venice or Hollywood. Maybe one day we will have the chance to move and live in Los Angeles, which has always been a secret dream for me. But then again, San Francisco is also not too shabby! I love walking around in the Richmond District, and get a sense of the Asian, Russian mixture of the Neighborhood and make great street pictures.

Another dream home town for me has been New York. Maybe a little bid too much out of our league, as living in a Neighborhood like Tribeca, SoHo or West Village with 3 kids is just very difficult. Let alone we would ever be able to afford a Townhouse at the Upper West Side! Brooklyn seems to become the new hot spot in New York, especially as the New York Times just published an article on how Hispters are taking over Neighborhoods like Williamsburg, or how they call it Will.I.Amsburg. But enough for the dreams I might have when winning the lottery, what I thought would be interesting to talk about what to search for or to look at for you as a marketeer to plan a content calendar for the pages you have on your site. To conduct this research, I’m using the following tool:

How To Use In-Page Analytics To Direct Your Content Marketing

In page analytics are an often overlooked tool for conducting user research, and a great way to get new topics to write more on. And the best thing is, your users already told you those topics are the ones they are interested in! From the Google help document (underline and red mine)

In-Page Analytics is available under the Content section on the Standard Reporting tab. It lets you make a visual assessment of how users interact with your web pages

So looking at which Neighborhoods  in New York we would need to write more about, I pulled up the In-Page analytics on the New York Neighborhood page, and used the Color bubbles to showcase popular Neighborhoods based on what the users have clicked on.

Where the colors give the scale of popularity relative to each other. This means, the warmer the color, the more clicks the link got in the time period I checked (data was for the month of April).

What stands out, is that there is one Neighborhood in particular popular, and the only one which gets a red color: Upper East Side. Some Neighborhoods didn’t even got a color, so it’s safe to say, these are the least well known, or not so popular neighborhoods in New York; these are:

Honestly, I never heard of these either, except for the name civic center, which we have here Civic Center in San Francisco as well. 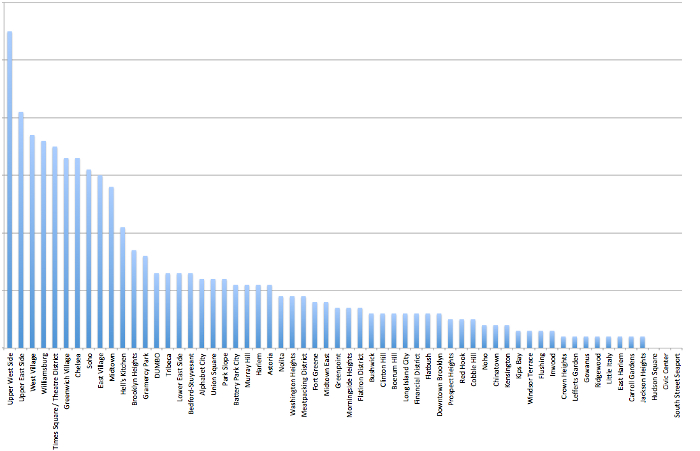 Now it’s only a matter of creating a massage map per Neighborhood and research the topics before the editor can start writing.

You can access the report in Google Analytics in two ways: