Home » Infographic: iPad exports from US

For the last couple of weeks I have been working on a story around the iPad exports through sales on eBay.com.  With the story picked up by The New York Times and Gizmodo. I sent the following post to my buddies of The Next Web as a guest post. In the past i’ve done some guest posts before, but never for a large tech blog like TheNextWeb.com.

With Apple selling more that 1 million iPads just in the US, we were wondering how many have been sold on the global eBay marketplace to buyers not located in the US. Essentially we are talking about free market forces that are at work, determining the price of an iPad on the global marketplace through matching demand and supply.

Currently, there are a large number of iPads for sale: iPad 16GB

and the iPad 64GB 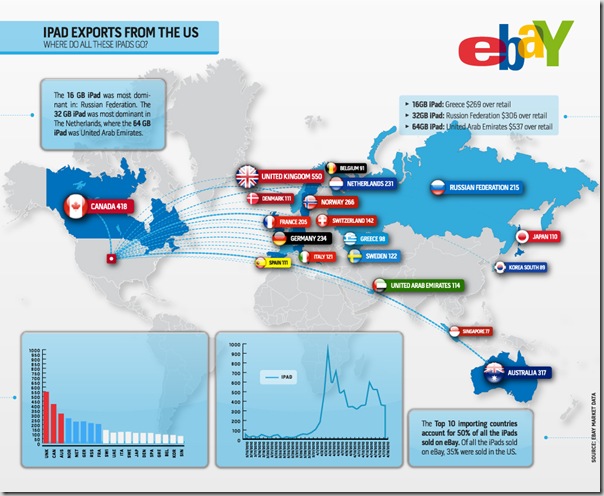 The World is Flat

Of all the iPads sold in the first two weeks on eBay, the majority went to buyers outside of the US. Just 35% of the iPads sold on eBay in the first two weeks, were sold domestically. The low percentage of domestic sales probably has got to do with the fact Apple did a great job keeping all the stores fully stocked. There have not been widely reported shortages for iPads across the US. In the past, any shortages in products have always been a reason of increased sales on eBay of the product!

The Brits imported the most iPads, where 550 iPads were imported. Of the top 20 importers of iPads, the small city state of Singapore imported 77 iPads in the first two weeks.

From the data, we can see who is more prepared to pull their wallet to buy an iPad.

Buyers from the United Arab Emirates were prepared to buy the 64GB iPad model at a premium of more than $500 over the normal retail price.

The announcement of the delay in International Launch of the iPad had a shock effect on the demand on the iPads sold on the US eBay website. Number of iPads sold to International countries jumped. The price for an iPad on  April 14th skyrocketed for buyers outside of the US.

Some of the commenter’s on Gizmodo actually did sell some iPads internationally at a profit:

Sold mine to someone in Spain and made enough profit to upgrade from the 16gb to the 32gb 3G model. Gotta love the ebay

International launch of the iPad

For the International launch of the iPad, we will be keeping a close eye on the numbers. What the data from the first two weeks tells us, is that the iPad is going to be a big success in the European countries.

By that time, we will keep you posted with an update to these numbers.

Update: AppAdvice has  a great overview on the International prices for the ipad at launch.

Dennis Goedegebuure is Senior Manager Internet Marketing & SEO at eBay inc. You can follow him at: TheNextCorner.net or on Twitter @TheNextCorner. You can buy your iPad on eBay through: iPad.eBay.com/

iPads currently for sale on eBay