Home » How I Found Amazing Interesting people on Twitter

As I’ve been blogging in Dutch for a number of years, I started in October 2006, I always wanted to launch an English blog to express my thoughts. Last year, which sounds strange to say on January 10th as it’s sounds so far away, I launched my English version of The Next Corner over here.

More than two years of blogging experience, almost 7 years working in Internet Marketing, on two continents, and just learning my way around social media marketing for the last 1.5 years, I had a few ideas on how to launch this blog successfully.

Being in Search Engine Optimization, and always spending time on Twitter, Techmeme, Friendfeed and StumbleUpon, I wanted to see if my thoughts on how other people think about how I use these tools and what I think the future is holding for them. As Twitter is the biggest time waster for me if it comes to social media sites, I choose to write a post “Why Twitter Will Go Mainstream In 2009“.

I worked quite some time on the post, and felt pretty good about the content. Off course it always could be better, but I thought I hit some valid points and provided a lot of links where readers could find additional resources. It started to daunt on me, that the post might even be better to post somewhere else, than on my own blog, as the number of readers would probably be a lot more.

One way to do this is guest posts. A guest post on a Twitter focused blog would be ideal! Guest posts can serve a number of purposes:

One blogger I learned a lot of and always read his blog is Darren Rowse of Problogger. I have read his book, and I follow his tweets. As he got later in the game with Twitter, I had the opportunity to follow how his Tweets evolved. Darren got hooked on Twitter, and has seen the power of the micro blogging platform. So much, that he started a new blog: Twitip. For all tips on Twitter.

A guest post published by Darren would be great, as he has build a big number of readers already on Twitip. The post that I crafted would fit better on Twitip, as the focus was primarily on Twitter, which matches the focus of Twitip.

But would he take my post?  Usually I’m not the shy or unconfident person, but when it comes to writing, I’m not that sure about myself. I still make a number of grammatical errors in English, as this is not my native language, but even in Dutch! I bet the style of my writing would not score straight A’s on any school for journalism, but I thought, what do you have to loose…

Darren swiftly answered my email on the proposal, and after a few bag and forth, I sent him the content of the post. As he must get a great number of requests for guest posts, I really was wondering if he would publish mine. And guess what, the email that made me pretty happy with myself:

Thanks Dennis – I plan to use this next week at some time (probably either 30th or 31st in the lead up to New Years Eve).

The email came in December 23rd, which meant I had to wait another week for my post to be published. I couldn’t wait, and felt excited about the possible outcome. Was I feeling nervous wether people wouldn’t like my piece, somewhat yes. But I felt good that Darren thought it was worthy to post in the first place.

So what happened after the post was published? The day of December 30th, I was checking my email and noticed an unusual big amount of people started to follow me on Twitter. I thought, Ah my guest post must have been published. Quickly I checked the Twitip site, and yes… there it was: Why Twitter Will Go Mainstream In 2009. 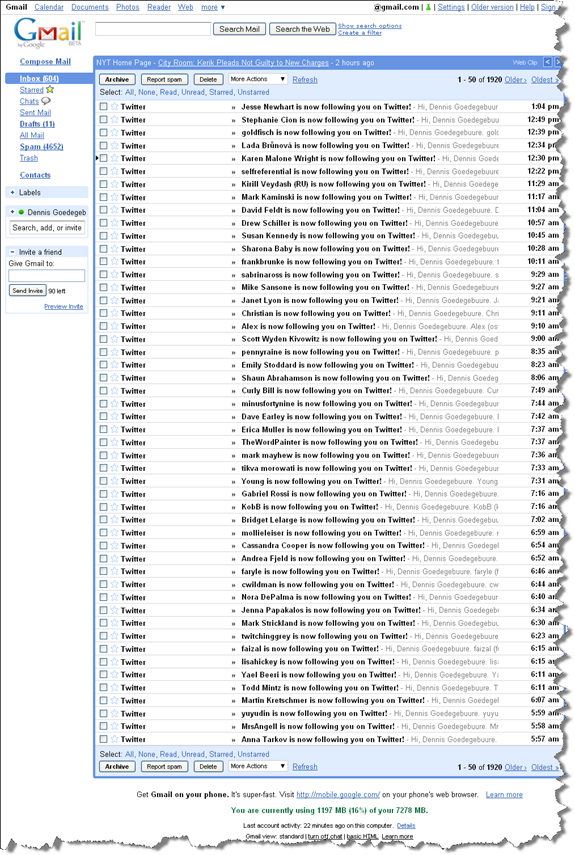 During the day, I received more followers on Twitter, and I was checking the comments on the blog post. Most of them were pretty positive, except… Yes off course, somebody pointed the poor grammar out.

Off course Angela is right, but as I already stated above here, I wished I knew better…

One of the best comments that stood out, only making the case that Twitter will go mainstream stronger was:

You know Twitter has made it when your 76 year old mother asks what it is, because she?s heard all about it recently. So you answer, and she ?gets it.?

That was a true occurence!

The traffic to my blog spiked for that day. Not so many directly from the post on Twitip, but the majority came through the link in my profile on Twitter. It died quickly after that, but at least I got a number of people who found the blog, and started reading it more often. Welcome!

Also, my Twitter followers went up significantly. I still need to check out a great number of my new followers and follow back where I think we have a connection. I don’t follow back everybody who follows me, as I’m looking for conversations, value and connection. The ones that I did checked out already, are amazingly interesting. Great to learn what they are up to, what keeps them busy and what I can ad to the conversation.

Below you see the graph of my # of Twitter followers. 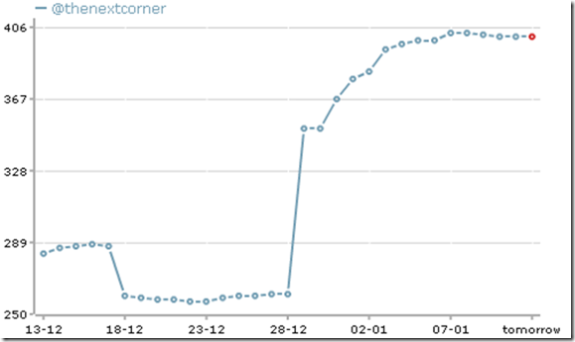 I’ve learned a lot from my first guest post.

I had my first guest post on a high profile blog, of one of the most well known bloggers walking this planet. Some people would not have taken the chance of asking, but I’m glad I did. I like to work under pressure, and knowing your work might be read by a couple of hundred people, only made me focus more on quality.

I know that whenever I do another guest blog post, I want somebody to proof read the piece before it gets published. This will probably help me in filtering style or grammar mistakes out of the text. But I also hope these people will challenge me to write higher quality.

Guest posts are a great tool to connect with other bloggers and to provide their blogs with new content. Having a different blogger doing a guest post on your blog, will give you the opportunity to take a short break from writing, and expose your readers to another way of looking at things.

I don’t think this will be my last guest post, as I’m already in contact with other blogs to do a guest post. One, actually, spun off from a direct message that I got on this guest post:

PS> Off course, after the last two weeks, we all know that Twitter is mainstream now through two important incidents: