Home » How @BetaBrand Jacked #HoodieGate and got Millions in Free Publicity

Struggling to get the attention from mainstream media for your brand? Launching a new product, but no blogger will pick up your story? What if you could get millions of free publicity for your brand? BetaBrand got massive attention for their Executive Pinstripe Hoodie. 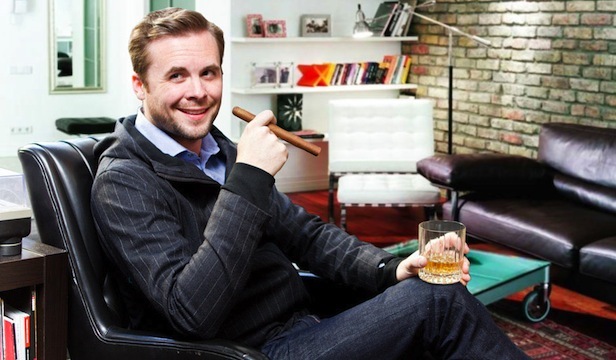 On the first day of the Facebook IPO roadshow, a video appeared on the Bloomberg website, in which Michael Pachter, an analyst for Wedbush Securities called it a sign of immaturity and a lack of respect for the future investors. Here is the video from this article:

“Mark and his signature hoodie: He’s actually showing investors he doesn’t care that much; he’s going to be him,” Pachter said in an interview on Bloomberg TV. “I think that’s a mark of immaturity. I think that he has to realize he’s bringing investors in as a new constituency right now, and I think he’s got to show them the respect that they deserve because he’s asking them for their money.”

These comments resulted in the starting sign of Hoodie Gate, in which major media TV-stations, newspapers and websites all jumped on the new angle on the Facebook IPO news. Finally something else to talk about than what has been discussed for months, Facebook revenue potential, user growth, and off course the Instagram acquisition. Hoodie Gate was born.

Major news sites, like TheNextWeb, The New York Times, The Atlantic, MSNBC, CNet, Forbes, PC Magazine, Portfolio and many more. If you search for Hoodie Gate on Google News, more than 750 articles can be found from websites which jumped on the news to milk it for more pageviews!

A couple of months ago, I listened to an interview of David Meerman Scott, the writer of the book NewsJacking

(Amazon link) on Copyblogger. (listen to the interview yourself here). What is NewsJacking? I would encourage you to read the book, written by DMS.

But think about this:

What if you could “inject” your name or brand into a national or international story of your choosing, becoming part of the story yourself?

This is exactly what happened with one of the products from BetaBrand; the Executive Pinstripe Hoodie was quickly making its round on social media websites like Twitter and off course Facebook, how meta!

It came to my attention through a quick post on Business Insider. The New York Times is reporting the company launched the hoodie just 2 days after Hoodie Gate started:

On Thursday, Mr. Zuckerberg’s sister, Randi, posted on Twitter a link to a pinstripe hoodie that a clothing label had unveiled immediately after hoodiegate began.

However, BetaBrand confirmed in a tweet to me the company started working on the hoodie before Hoodiegate started, and based on the comments on teh product page, you can see comments back to February.

@mattmcgee @TheNextCorner Actually, it’s been in development since February. This is just an extremely happy coincidence. #hoodiegate

Although Betabrand calls  it a happy coincidence, the way their Executive Pinstripe is taking over the second paragraph in any story about the Facebook IPO is an amazing example of how NewsJacking could work and when successful can get a company or brand major free publicity worth of thousands maybe even millions of dollars.

For Betabrand it was possibly a very successful week, with great sales growth for at least one of their products, the Executive Pinstripe Hoodie. Hopefully for this company, they will see spil over effects into their other categories. And with Facebook’s IPO still a week away, Betabrand can ride Hoodiegate for more sales, free publicity and brand building to the max!

And with customer service like the one displayed, I’m confident the company is looking at a successful future. I’m rooting for them, and have ordered my Executive Pinstripe Hoodie, with local pick up in San Francisco…

@TheNextCorner Dennis: Good news! You ordered yours early enough to be delivered within a week.

I would like to think the whole Hoodie Gate scandal was pushed in this world by an attention seeking stock analyst who saw an opportunity to make a larger name for himself not focussing on the actual news and potential of Facebook’s IPO and it’s roadshow, but focus on the unrelated news of the Hoodie. However, as described by the New York Times, it has become a fashion statement of East Coast vs West Coast.

The hoodie in Manhattan prompted, as Mr. Zuckerberg may have expected, a gush of approval and disdain. Hoodiegate, it came to be called, and it began to show signs of a culture war between the two coasts – Wall Street versus Silicon Valley.

Hopefully this West Coast – East Coast; Wall Street vs Silicon Valley has a better ending than Tupac vs Biggie!