Last Sunday I learned there is a specific Neighborhood in San Francisco with a big Hellenic Heritage. It’s a part of SOMA where Greek immigrants settled in the early 1900’s. I learned this by paying attention to the signs and plagues placed on the sides of the streets to remind people what has happened in the past. I happened to see the following sign at the corner of Third street & Folsom, which is at the south-east corner of the Moscone Convention center, right next to the Yearba Buena Ice skating & Bowling Center. 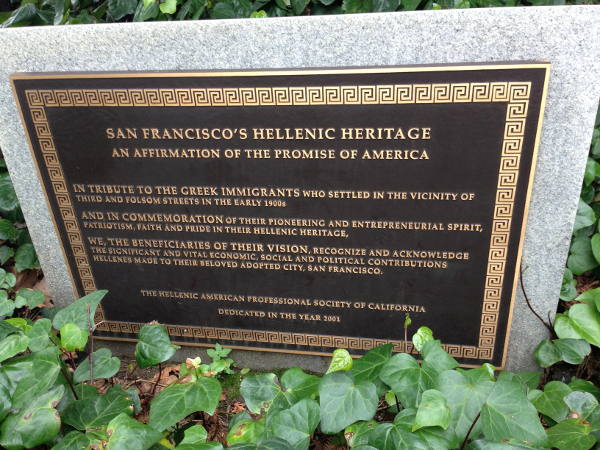 And in Commemoration of their pioneering and entrepreneurial spirit, patriotism, faith and pride in their Hellenic Heritage.

We, the beneficiaries of their vision, recognize and acknowledge the significant and vital economic, social and political contributions Hellenes made to their beloved adopted city, San Francisco.

Just two weeks ago, I listened how Dr. Mike presented at BlueGlassX how he liked to take pictures of local signs of historical events or things to remember about the history of a local neighborhood. I had never expected to learn so much new stuff about the area’s in San Francisco. Opening up your eyes, and take pictures of the signs and plagues around the city can educate your kids about why there are a large number of Falafel and Mousaka restaurants around Folsom & 3rd street.