Over the years, I have not yet grown my number of Twitter Followers over 1,000. But I managed to get two reasonable bumps in number of followers. How? I used a guest post on a Twitter blog to go from 140 to 600, and this year, an Interview on a well read blog pushed me over 700.

Too many blogpost and video’s have been written how well guest posting works to build your brand, get more followers or RSS readers or get more comments on your own blog. I will not expand on the existing materials from better experts than me. I will just link to some great resources out there at the bottom of this blog. No, what I would like to highlight here, are just my own experiences with guest blogging, and how it helped me to get more Twitter followers.

The whole purpose of my guest post were three fold: 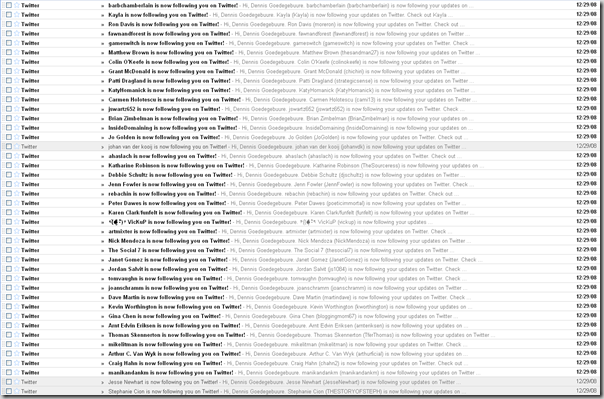 Over Christmas last year, I did an email interview with Aaron Wall. He asked me if I would be interested to do this, to get my perspective on working on a large site like eBay. As I’m a long time reader of SEObook, I was honored I would be featured on SEObook.com.

I got a lot of nice comments from people about the content, and obviously I also was interested in the effects on the number of Twitter followers. Now using Twittercounter, I could see the number jump up right after the interview was published.

The good news from this jump is, most of the new followers are working in the same industry as myself. This creates new opportunities to ask or give feedback on certain tests I would like to conduct, or changes in the search landscape that I see.

Although the two biggest jumps in the number of followers came from the guest post on Twitip and the interview on SEObook, I also got a smaller jump just recently by doing a presentation for a number of highly influential Mom Bloggers.

These ladies have it going on, and Twitter is definitely not new for them. As I was checking out their blogs, Twitter and Foursquare updates, I made sure I had my Twitter handle in the last slide. I saw a small jump in the numbers as you can see from the graph above here.

There are a number of ways you can gain followers on Twitter. The key, however, is to keep them, and get value out of the conversations you have.

As promised, here are some resources I highly recommend on guest blogging: