Since the beginning of April, I’ve seen a decrease in Adsense revenue on the sites that I run. Normally I don’t get that much per months, but there has been a significant drop from one day to the other. Since April, the revenue has come down.

So, naturally my hypothesis is that this is due to the economy being in a slump. Lower Adsense revenue can actually be due through multiple factors;

For the last year, I have not really seen a drop in CPC on the sites. 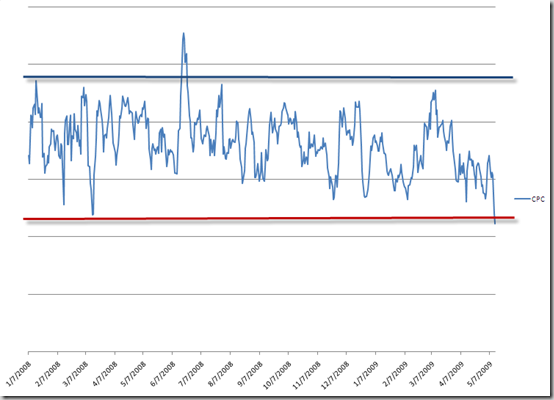 As you can see, CPC stayed within a bandwidth for the last year. No significant drop that could have caused the drop in Total Revenue.  (graph shows 7 day moving average of the CPC)

Looking at the eCPM of the impressions that were served: 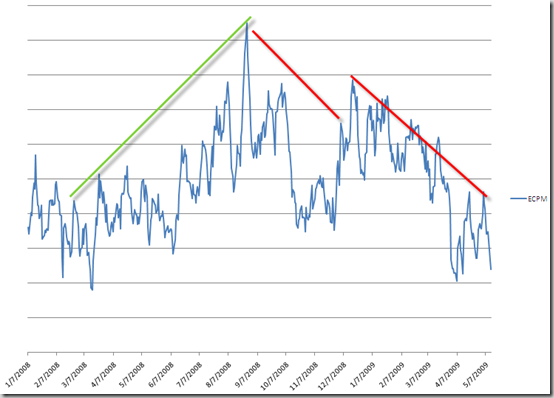 Clearly, I don’t have a CPC problem, but an impression problem. There goes my Hypothesis. I guess I’m not such good strategist after all.

In these dark economic times, it’s becoming harder for every company to satisfy shareholders.

Now imagine you are Google, very successful in the past couple of quarters, but struggling finding new ways to grow revenue. One source of revenue growth could be to take a larger share of the revenue that is shared with Adsense publishers.

Looking at today’s early Adsense reporting, my thoughts are going in the third direction. Just check the average cpc on the placements pointed out in the image below:

Updated: Image reoved as it is against T&C’s of Adsense to display CPM or CPC’s.

Can somebody please explain me how it is possible earning just $0.01 with 4 clicks, when a minimum CPC of at least $0.01 is necessary to even start a campaign?

So much for webmaster welfare as an extra source of pocket money!