Home » General Motors on the cliff looking down

What do you think, give more money to General Motors, or let it default? Defaulting a company like GM would mean a huge jump in unemployment of people in the area of Detroit. It will be devastating for the families involved.

With the stock at a multi year low, and the market cap under $1 billion, I doubt this company will see it’s turn around. Even if the recovery plan would succeed.

On February 17 this year, GM submitted a restructuring plan to save the company. Here are the highlights:

It seems GM is not even getting the chance to execute on this plan. With the stock price close to becoming a penny stock, there seems not much room for balance sheet restructuring, and more so enough time to restructure workforce, brand portfolio, and more important product innovation.

With the economy in a recession, I wonder how the hell these investigators ever though to bring GM back to profitability when no consumers are buying cars. For the last couple of years, GM has not been able to make any profit, so why would they think they can turn this around within 24 months from now, while they have failed for so many months before?

Just take a look at all the red below here. For the last 3 years GM has been loosing money: 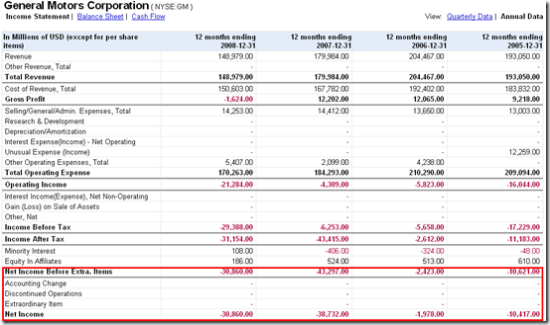 The real impact of GM filing for bankruptcy is not so much the loss of the GM business and all the employment directly involved. The corporations who are suppliers to the automobile industry are at stake as well.

As outlined in the plan:

The automotive industry has been the backbone of U.S. manufacturing and a leading
investor in research and development for nearly a century. It is a significant factor in the U.S. economy, employing 1 in 10 workers and a major purchaser of U.S.-made steel,
aluminum, iron, glass, plastics and electronics. It is an industry undergoing massive
change, and one that can be key to both transforming the U.S. economy and creating
high-tech,  “green” jobs that support a healthy and growing middle class.

Who is to blame?

From every side I hear different reasons why GM is in trouble. Everything and everybody is to blame, except for GM. You hear excuses like: “It all started with the housing market”, “Consumers are not buying new cars”, “Consumers prefer non-American cars”.

I just saw a congress man on CNBC claiming that the best auto engineers of the world are located in Detroit, with the best hybrid cars being manufactured in Detroit. At that point I was thinking: “I want to have what he’s been smoking”. The bull shit that is being broadcasted is just unbelievable. Why do you think GM is not selling any cars? Why do you think people prefer non-American cars?

Let’s be real, if American consumers would like the Detroit products, they would have been buying the cars for years. The American car manufacturing industry has been in trouble for years!

There is a don’t blame me, blame the economy climate with the people whose heads are on the chopping block. It’s time to face the music…

In the last six months of 2008, housing price declines accelerated, foreclosures rose,
credit markets froze, job losses skyrocketed, and consumer confidence tumbled. As the
economic crisis intensified, automotive sales fell to their lowest per-capita levels in half a
century, putting automakers under enormous financial stress. All automotive
manufacturers have been severely affected, with most reporting significant losses in the
recent quarter. Under these extraordinary conditions, GM‘s liquidity fell rapidly to levels
below those needed to operate the Company, and GM was compelled to turn to the U.S.
Government for assistance.

Clearly, the high paid consultants who worked on this restructuring report for GM have miscalculated the economy in a big way. They forecasted the US GDP decline for the month of February at only -2%, while it is rather -6% –  -7% ! Ouch..!

I cannot seem to ignore the fact that this restructuring report has been drafted to secure the first two government grants General Motors received. Just think about it, what would happen to the jobs of the overpriced consultants and strategy makers at GM if the company would fault? Right, they would be out of a job as well.

The incentive to propose unreal restructuring plans to buy a couple of months of time, paid on tax payers money, is pretty big.

If GM would default, great brands are going under. Currently GM is producing the following brands:

I’m especially crazy about the big Cadillac’s from years ago. Once I almost bought a 1980 Cadillac El Dorado. Boy, Am I happy I didn’t at the time, because it would have cost me great amounts of money every week to fill up the tank with gasoline. 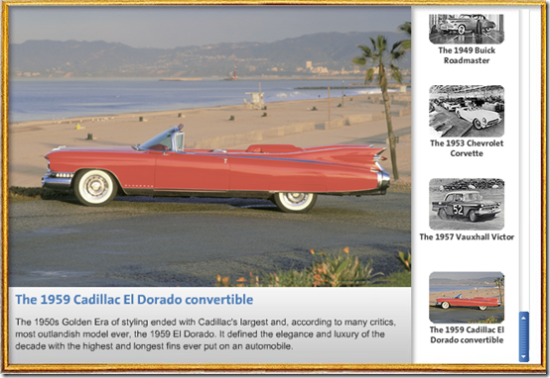 A lot of people asking if the government should support GM with even more money now. It seems that that money is spend better somewhere else. Why would GM be able to turn their business around right now using the money.

What do you think, should General Motors be saved with even more government, or better said, tax money?