Home » Free can be a Perfectly Good Business Model

Are you providing a service for free? Would yo consider a free model for your website, and only make money through advertisement? Markus Frind the founder of the site plentyoffish.com has proven that free can be a business model.

2008 was a good year for Plenty of Fish. As Markus describes in his blogpost, the site grew significant, and became the #13 destination in the US (according to Hitwise). Plenty Of Fish grew like hell… 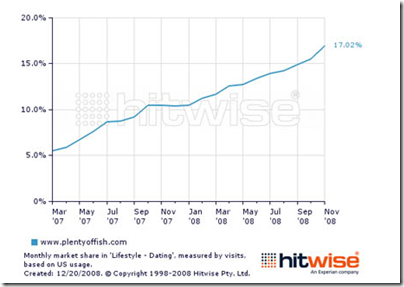 Plenty of Fish has become the dominant dating site in the dating category. Which proofs free is a business model in dating. eHarmony or Match, the second and third in dating land, ask a subscription fee for looking at all the singles on their site.

This shows how voyeurism has become a daily part of our lives. We post messages about our lives on social networks, we tell the whole world exactly what we are doing on Twitter, and we go check out the other sex on a dating site online.

But where Markus is using Hitwise as his source, other analytics partners show different numbers. One thing they all have in common, Plentyoffish.com is growing and fast!

From the compete figures, Match.com is still the biggest when it comes to unique visitors. Plenty of Fish comes third.

What is very interesting is that Markus writes about the impact of the recession on the registrations on his site:

Since the recession began in the US in Sept  i’ve seen the signup to relationship ratio of the site increase by 10%,   i’ve also seen the attrition rate go down significantly.   There has also been huge volatility around signups since sept  so its been hard to draw conclusions.

I have seen a reverse on one of my sites, where I have the affiliate links for Sugardaddy.com implemented. The number of signups, the ones I make money with, have taken a nose dive. Sugardaddy.com is a site for filthy rich men and golddigging young ladies.

I was making a decent amount of money on the side, but this recession has made deep cuts in the secondary income stream from this particular affiliate program.

If you ever want to begin a dating site, just remember that your most important keywords will probably be your brand name. Plenty of Fish gets most of its referral traffic from iterations on the brand name: 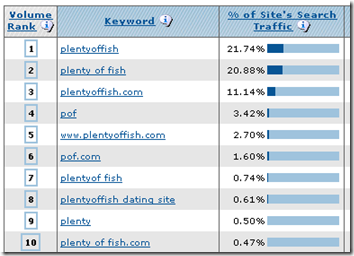 This shows that even in established markets, where the leaders were feeling pretty safe and comfortable, a new site can come up and grow on a free model to become the biggest in the industry.