A couple of weeks ago, I saw a call from Guy Kawasaki do something interesting to get something in return. You would need to pose with his book Enchantment

(Affiliate link) on a picture, post this picture on Google+ and Facebook, in which you tag Guy to let him know you were participating in the promotion. In return, you would get a signed by Guy Kawasaki, personalized new cover for the book mailed to you. As I’m always interested in learning new ways to engage large audiences, and off course, as an Apple fan-boy, interested in what next for Guy Kawasaki, a former Apple evangelist. 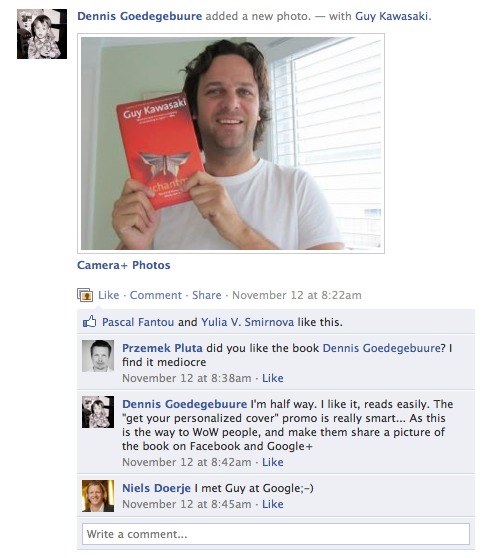 So, when I saw the announcement online to participate I didn’t hesitate! (I believe the announcement was through Twitter but because it was the rare occasion I had gone out for a dinner and drinks at a Saturday night with Alex & Marcus from SEOkotoberfest, so I can’t really remember where I spotted the call from Guy!).

I think this is a brilliant move from Guy Kawasaki. He gets free exposure for his book, while the effort to delight people is limited to signing a large number of book covers and having these send to these people. The number of people who have voluntarily signed up to share a picture of them with the book to all of the people they are connected with is priceless. It’s not only almost free advertisement for the book, the fact people want to pose with the book on their social network profile is a personal endorsement for the book. You almost cannot get stronger advertisement than that!

I have endorsed Guy’s book Enchantment to 649 Facebook fans who follow me on the social network, and to 1,262 people on Google+ who have added e to their circles. There is a little overlap between these two large networks, but still, at a minimum, Guy already got me to share the book and its cover with more than 1,200 people, and have me personally endorse his work. And how much did that cost…..???? No advertising strategy with large TV budgets can compete with the power of personal endorsements. Not even with the slightly fabricated ones when you receive a signed, personalized book cover…

Oh, and before I forget, yes, I received mine! And yes, I would pose with anybodies book and write a blog post about it, IF they would ask for it! 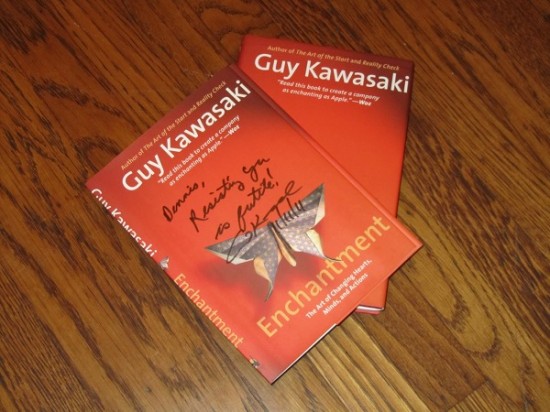 Buy the book yourself on Amazon. I can highly recommend it, not only because of the content, but because of the smart story around its advertisement…