There has been some conflicting reports regarding the eBay Lawn chairs. Apparently the San Jose Mercury News has reported that Meg was responsible for getting rid of the lounge chairs.

Job One was to become the company’s grown-up. She replaced the lawn chairs with corporate cubicles.

Then the VentureCountyStar reports  that this same sentence has been used before:

…..I came across a line that stopped me in my tracks — because I had written it before, about somebody else….

…I had paraphrased what Westly told me about one of his first acts when he was hired in 1997 as vice president of business development: "to order the office lawn chairs replaced with traditional furniture."….

….I consulted the bible on eBay history and mythology, Adam Cohen’s book "The Perfect Store." Cohen puts the year of the lawn chairs’ demise at 1997, but credits neither Westly nor Whitman. "(Founder Pierre) Omidyar and (president Jeffrey) Skoll decided that the time had come to replace the beach chairs and assembled desks with real furniture." 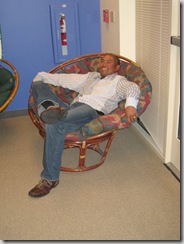 Well, let me tell you, the original Pierre lounge chair is still there, together with employee number 1. That’s right, everybody who read The Perfect Store will recognize the story that Pierre needed somebody to open up the envelopes, administer and collect the checks at the bank. He still works with eBay!