In a few weeks, everything Robert Scoble submits to DIGG will go popular, hitting the homepage. The question will not be if Scoble will control the hot stories on Digg, but more when! Digg will bann Scoble for violating their TOS, Scobel will have a different opinion. And then off course we will have DIGG/Scoble gate!

What did just happen? It all started with this Tweet: 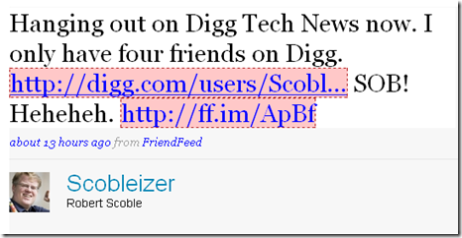 Discussion on Friendfeed is here.

Robert Scoble subscribed to Digg on August 28th in 2005, but only used the site sporadically. You can see from his stats that he has not been spending as much time on Digg as he has on Twitter or Friendfeed.

Given that Robert Scoble has such a large followers base on Twitter, Friendfeed and Facebook, I expect he will get a lot more friends on Digg as well. And he will have those friends fast!

Just one hour after his Tweet, he already got 177 new friends. Here.

Let’s just assume Robert can add 10 % of his Twitter followers as friends on Digg. Currently Scobleizer account on Twitter is having 48,017 followers. If only 10% of these followers add him to Digg, he has the opportunity to broadcast a message to 4,801 Digg friends.

Now what would you do with more than 4,500 friends on Digg. You can shout massages to them, they can Digg your submissions, and you can take over the homepage pretty easily with a nearly 100% popular ratio!

Off course this will get Robert Scoble banned from Digg, just like all the other Digg super users. Whenever some individual gets too much power, the account will get shut down. But just imagine the experiments Robert can conduct using the crowd to vote on his stories.

I’m looking forward what the intentions are from Scoble on Digg. Will the Digg community go crazy, what will the reaction be from Digg on his submissions reaching the homepage, and how fast will he get banned from Digg.