The future of the Internets is at stake. What will the Internet become when you as webmaster can get sued over linking to other websites? DIGG is taking down submitted site links, and remember December 23, 20008; A story widely reported in the blogosphere: 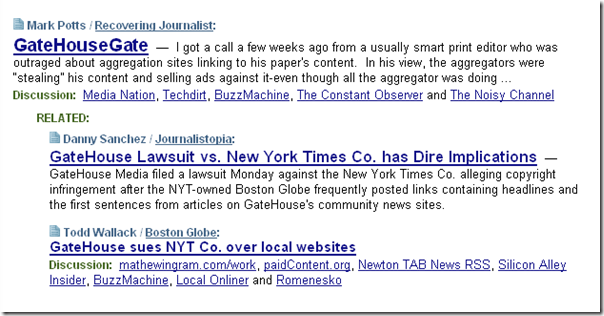 From the BostonGlobe itself:

In a lawsuit filed in US District Court in Massachusetts, GateHouse argued that the New York Times Co. violated copyright law by copying “verbatim” headlines and the first sentence from articles in the Newton Tab, Daily News Tribune of Waltham and other GateHouse papers on the Globe’s own websites, along with links to the full articles.

The ending paragraph on Techdirt describes it very well:

Either way, the end-result of all of this is that other websites have already come to the conclusion that it’s just not worth linking to GateHouse sites at all. Consider it a stupid lawyers tax. Suing people for sending you traffic has to be, perhaps, the most braindead business strategy around, these days.

The next Industry is getting an idea; Let’s sue DIGG, the biggest distributor of links to copyrighted free stuff…?!?

On December 30th 2008 DIGG received a take down notice for copyright infringement on the movie In The Electric Mist starring Tommy Lee Jones and John Goodman. As the movie is not very well known, the plot is short described as:

New Iberia Lt. Dave Robicheaux is trying to link the murder of a local hooker to New Orleans mobster Julie (Baby Feet) Balboni-back in his home parish as co- producer of Hollywood director Michael Goldman’s Civil War film-when sizzled/psychic movie-star Elrod Sykes, pulled over for drunk driving, starts babbling about a corpse he found in the Atchafalaya Swamp-the corpse of a black man Dave had seen murdered 35 years before.

Argh.. plot, smot… Who really cares. Apparently the movie was for all to see on the Internets, for FREE. And Diggers just were submitting the link to Digg to let the world know! This is common practice for the DIGG crowd. Not many reach the front page, but at least you can find a free movie whenever you want to watch one! Just search for Watch Free Movie.

It’s not the first time DIGG removes something from their site. A simple site:digg.com “This item has been removed pursuant to a” search exposes all the submissions that have been taken down by DIGG lately. In Google 572 results of submission which were taken down by DIGG show up.

Re: Notice of Copyright Infringement – “In the Electric Mist”

Image Entertainment Inc. is the owner of the exclusive rights to the film “In The Electric Mist” starring Tommy Lee Jones and John Goodman. I am the director of Business affairs and authorized to act on behalf of Image Entertainment.

The copyrighted work appears on your site as: In the Electric Mist and can be found via search: http://digg.com/celebrity/In_the_electric_mist_Watch_Movie_Online_Free_No_Kidding)

This use is unauthorized and it is our good faith belief the infringement is not authorized by the agent or owner of the exclusive rights. The information contained herein is accurate and I declare under penalty of perjury that my action and the actions of Image herein are by the copyright owner.

Nothing contained herein shall be deemed a waiver or relinquishment of Image Entertainment’s rights at law or in equity.

The submission in question can be found here. DIGG has removed the link to the site where you can watch the movie for free. DIGG has complied with the take down notice to avoid any further legal actions from Image Entertainment.

However, the original submission, including the link to the movie can still be found in the Google Cache:

Here you can click on the link, which takes you to the site where you can see the embedded movie In The Electric Mist for free. 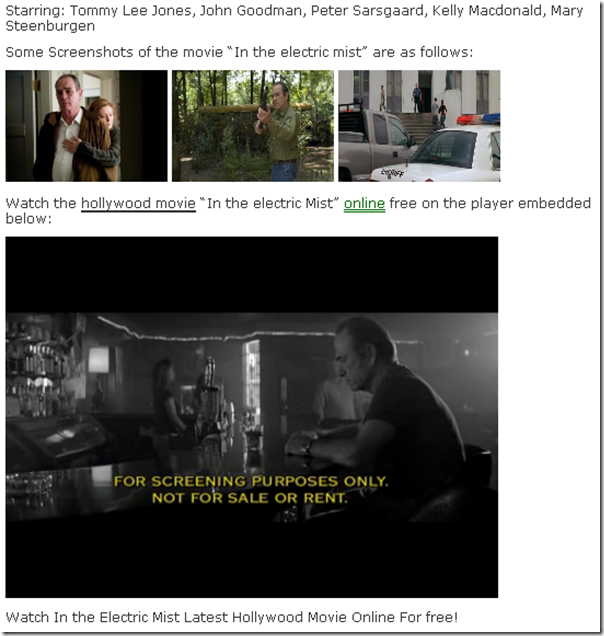 The movie itself has been uploaded on Megavideo.com. Find the movie here.

Megavideo is a site registered in HongKong.

It must be extremely difficult for Image Entertainment to clean up the free distribution of the movies that are uploaded on Megavideo.

So for the last time:

In the electric mist – Watch Movie Online Free! No Kidding

Image Entertainment, Inc. (Nasdaq: DISK) is a leading independent home entertainment company that acquires, licenses, finances and produces exclusive content for worldwide video distribution through its direct relationships with major North American retailers and foreign sublicensees such as Sony/BMG and Warner Music. Founded in 1981, the company has over 2500 exclusive DVD titles and approximately 200 exclusive audio titles in release. Image houses a complete full service graphic arts department that creates all of the packaging for the company’s products as well as all of the sales collateral; over 90% of the company’s production work is completed internally with state-of-the-art equipment and a team of experienced technicians that carry out every step of the DVD creation process. The company continues to release an average of 30 new exclusive DVDs and four new exclusive audio titles per month across a wide range of programming.

Do you know your online rights? Have you received a letter asking you to remove information from a Web site or to stop engaging in an activity? Are you concerned about liability for information that someone else posted to your online forum? If so, this site is for you.

Chilling Effects aims to help you understand the protections that the First Amendment and intellectual property laws give to your online activities. We are excited about the new opportunities the Internet offers individuals to express their views, parody politicians, celebrate their favorite movie stars, or criticize businesses. But we’ve noticed that not everyone feels the same way. Anecdotal evidence suggests that some individuals and corporations are using intellectual property and other laws to silence other online users. Chilling Effects encourages respect for intellectual property law, while frowning on its misuse to “chill” legitimate activity.

The website offers background material and explanations of the law for people whose websites deal with topics such as Fan Fiction, Copyright, Domain Names and Trademarks, Anonymous Speech, and Defamation.

In addition, we want your help. We are gathering a searchable database of Cease and Desist notices sent to Internet users like you. We invite you to input Cease and Desist letters that you’ve received into our database, to document the chill. We will respond by linking the legalese in the letters to FAQs that explain the allegations in plain English.