Barack Obama has lost the #1 position in Twitter followers. Officially CNN Breaking News has the biggest entourage of the Twitter scene; (measured through Twittercounter) 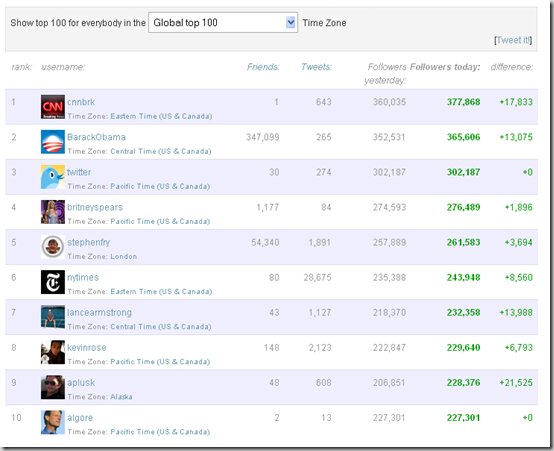 And it’s impressive how fast their posse has grown in the last couple of days. 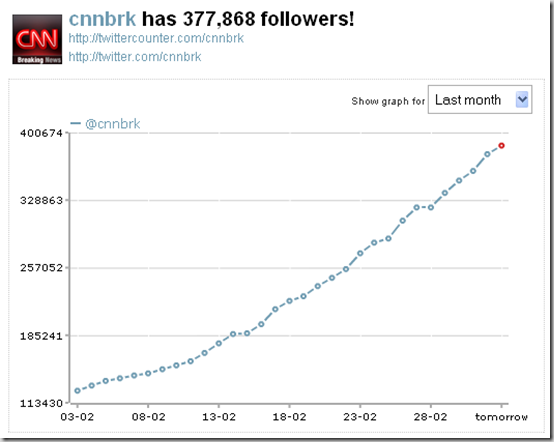 Why does this matter?

Gone are the days the early geeky adopters of Twitter are the rockstars on this medium. Make way for the big brands, the people with the deep pockets, and the real celebrities.

People like Robert Scoble, Guy Kawasaki or Leo Laporte were making up the top 3, now you can find them at #75, #71 and #62 respectively. i don’t mean to be disrespectful to these guys, because they still do an awesome job in when it comes to building connections and engaging in the discussions going on on Twitter, Friendfeed and Techmeme. But Twitter breaking into the mainstream means that celebrities like Britney Spears or mainstream media get so much more chance of growing exponentially with all the media attention, that it is becoming a self fulfilling prophecy.

I wonder how we will look back the the times when we were just wet behind our Twitter ears, and still defining how we would use the technology to our advantage. The purpose of Twitter is being redefined every day over and over again, that I suspect nobody can make a clear prediction how the platform will be used in a year from now.