Home > Internet > SEO > What can an SEO do about Google rankings ‘Did the Holocaust Happen?

If you have been following, there are a number of people and publications calling out Google for ranking a holocaust denying page at the top of the results for the term; “Did the holocaust happen?”. This started with an article in The Guardian on how Google results are shaping the way people see the world…some people! Read it here, it’s quite interesting. Google is not ‘just’ a platform. It frames, shapes and distorts how we see the world. Still, to this day Google is primarily ranking content based on a number of rules, where they usually don’t alter the way pages are ranked, even in a case like this. But there is something you can do, already described by The Guardian in How to bump Holocaust deniers off Google’s top spot? Pay Google.

As an SEO I generally don’t pay Google. So what can any SEO do..? Right, just what John Doherty did; set up a website and start a campaign to outrank the page you want to see disappear. So if you would like to support his efforts just write a blogpost and link to his site, Did the Holocaust happen? Yes! Read also why John took action; Why I built didtheholocausthappen.co

John’s efforts are not going by unnoticed. Search engine expert Danny Sullivan wrote an article about the site, and you can see the Google rankings changing. Official: Google makes change, results are no longer in denial over ‘Did the Holocaust happen?’ And more SEO’s are following with their own site, which also deserve a link. So you can also link to: Is the Holocaust real? Unfortunately, yes or Did the holocaust happen

Slowly, you will see the Google search results changing. Already, the Search Engine Land article is ranking at the top. 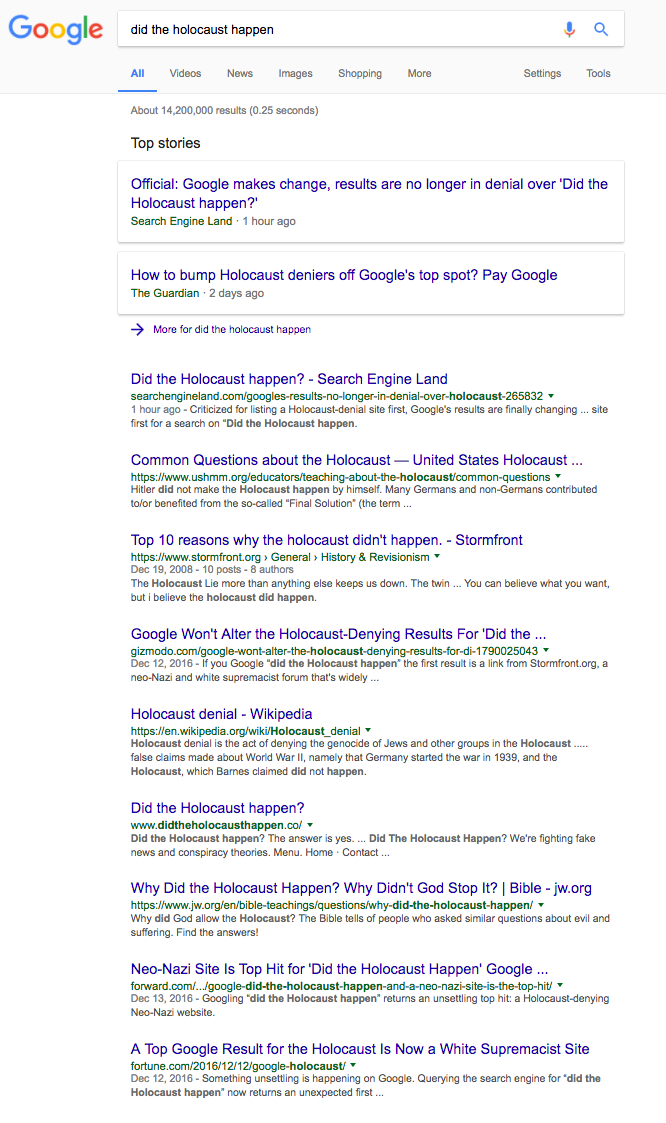 Other sources which need a link: