I recently started to use the free comment system of LiveFyre here on this blog. As we use the comment system on the Slashdot Verticals for Cloud Computing, SlashCloud and Business intelligence, SlashBI, this place is a perfect testing ground for me to see how the system performs. At first I thought it was awesome, as a user can easily spread their comments on social network websites like Facebook and Twitter. Nice, especially as follow up replies on these websites will get captured and integrated in the comment stream on my blog as well.

With the launch of the Facebook WordPress plugin, I’m now running two separate comment systems on this blog, of which Facebook probably gets the more engagement just because of the location above the LiveFyre comments. And although Facebook is sharing the comments among a much larger possible audience, since the comments are spread throughout the commenters network of friends, there is a drawback I just realized. The plugin does not alert me of new comments, which would make it easier for spam attacks. 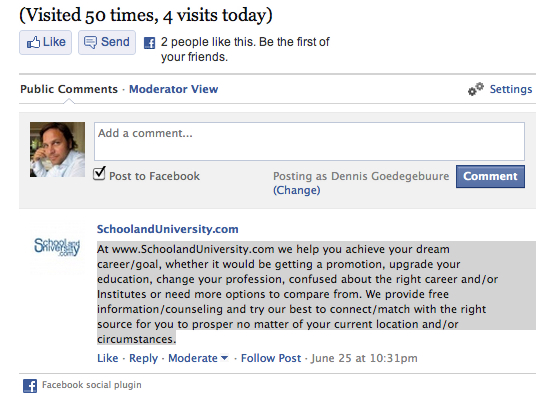 On my last post about the Power Outage in my street a couple of weeks ago, I just realized a comment was placed, totally unrelated to the post, which I would qualify as spam! Jeez, how can you do your brand a disservice by spamming with your real Facebook account! Looking at you, Schoolanduniversity.com. How irrelevant was the comment (now removed)? Just see:

At www.SchoolandUniversity.com we help you achieve your dream career/goal, whether it would be getting a promotion, upgrade your education, change your profession, confused about the right career and/or Institutes or need more options to compare from. We provide free information/counseling and try our best to connect/match with the right source for you to prosper no matter of your current location and/or circumstances.

I wonder what their reaction will be when I post a link to this post on their wall! I will update here as soon as I’ve done that, and with possible responses. This should be fun!

Is there a setting I need to switch on to get comments updates? Did I overlooked this feature?

One of the great features of a comment system like LiveFyre is the ability to have a single sign-on with your system if you have already a large community of commenters. Slashdot has been around for years, where people have built up their profile with their Slashdot account, placing comments with their handle. Extending the commenting with the Slashdot handle was one of the requirements for our verticals. LiveFyre was able to do this!

However, the single sign-on system is also used by sites to build up their own community on their site. The process to comment on one of these sites is pretty cumbersome if it’s your first comment. This morning I was eager to place a comment on the article on an analysis of the Wordcup soccer final 2010 between Spain and The Netherlands and how this relates to PageRank/Link-building. As I’m still pissed off and disappointed from loosing that final AND I’m passionate about SEO, my interest was grabbed instantly.

Reading Pagerank Algorithm Reveals Soccer Teams’ Strategies was fun, it’s a great article! However, I just wanted to point out the final was not Hollands best match on the World-Cup! Although Spain was brilliant, playing Total football, passing the ball only after touching it once, the match was only decided 2 minutes before the end of the extra time. It could have gone either way!

The final of the Worldcup 2010 was definitely not one of the better matches of The Netherlands team. The pressure of winning might have influenced the way they have played…other than that, Spain has been on a roll the last 6 years (BTW> I’m Dutch, and still regret the final score!).

It would have been interesting to see the evolution of the passing graph of the two finalist, and the way these teams grow into a tournament. Compare the evolution to sites that win, and gain pagerank, and you might find a winning strategy!

So after typing the comment, I logged in with my Twitter account, only expecting to get a success message that my comment was placed on the site, or under moderation. Not the case, I was confronted with a pop-up asking me to login or make a new account if I didn’t have an account for commenting at Technology Review. Damn.. You making it me so damn hard to engage with your site that I want to drop off here!  I did however make an account, and confirmed the comment to be placed on the site! 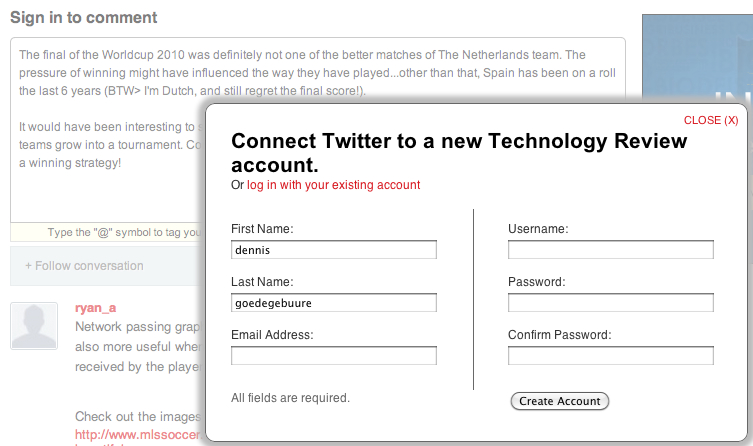 Now that you have logged me as a commenter and part of your community, what’s in it for me? Do I get free daily tech newsletters send to me to get me back to your website? If so, I’m so looking forward to it, as I didn’t opt-in to any newsletters, let alone confirm the email address to be spammed. We will see, and once again, if this might occur, an update will be placed here!
Now, I’m the happy owner of a user profile on the site Technology Review, where it shows I made one comment so far!

Another drawback of this comment system, is that I cannot ink directly to the comment! I want to bring any of my readers into the conversation at the exact place where I left the comment, so they can follow up if they find the need to add to the conversation. However, this is not possible! On a site with 2 comments, that does not make it a horrible user experience. However, at Slashdot, where some of the articles get more than 500 comments, (the top story got more than 5000! See here the hall of fame), it is an essential feature to be able to link directly to a comment. Every piece of commentary placed on the site by the community get’s it’s own URL, which makes it easy to dive in where you would like to. We even added the share functionality for Facebook, Twitter and Google+ straight on the comment URL, something the Google+ team was surprised about a couple of months ago, since they had never thought about it. To me, it just makes sense…
See the comment from Anonymous Coward here, with the red arrow pointing to the direct link (yes, still waiting for the canonical URL tag pointing to its parent), and the social sharing functionality on the comment itself to make it easy to spread!

I’m thinking hard to turn the WordPress comments back onto this site. Can’t we just make blog Comments better and most important: EASY!!!
End Rant!