The popular dolls American Girl is a top ranking keyword I have been researching today. Especially as the brand of the popular dolls have come in the news with a controversial new doll; the homeless doll, it is interesting to see how the search results on the keyword American Girl change with all the fresh news content that is coming online. With the new dolls coming out on time for the shopping season, it’s going to be interesting to keep track of how the SERP’s look like, and which site will sell the most. And for $95,- the new American homeless Girl will be sold to anybody who is interested in a little controversy.

Below you see the SERP screenshot I just took. As you can see, there are a 4 universal search blocks that take up space; news; 2 video; blog- and book search. 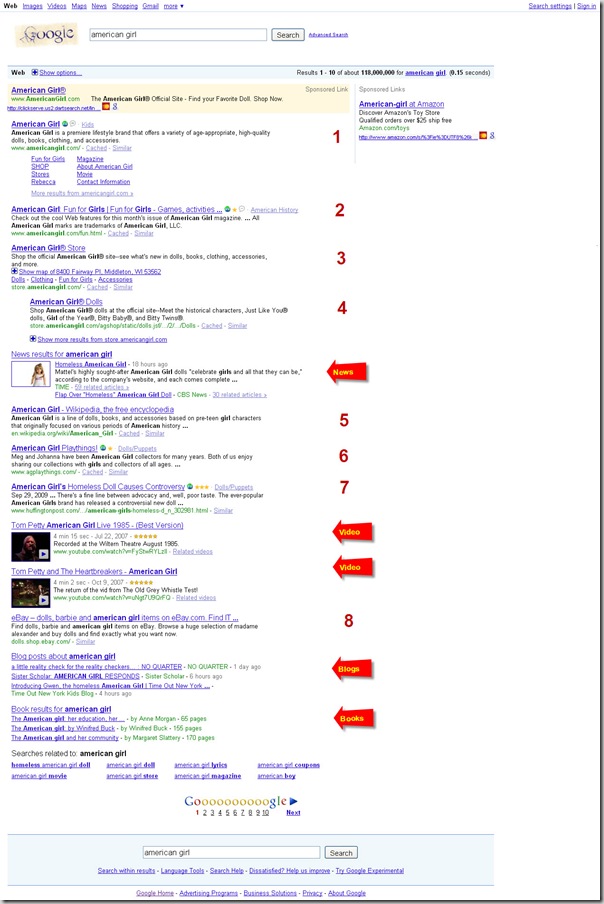 There are only 8 text results on the first page. Of these 8, 4 results are for the actual brand: American Girl (results 1 to 4). Number 5, just below the news result, Wikipedia is listed. #6 is for American Girl Playthings, which is a hobby site from two collectors. The Huffington Post wrote a couple of days ago about the American Girl homeless doll, which got them on position #7. And the last site ranking on this first page for American Girl is a page from eBay.

But I guess not all Huffington Post bloggers are thinking the same way, as can be read in the comments:

Dolls can be used as tools to teach young girls about relationships—and to learn about and accept people who are different from themselves. I’m happy that “Gwen” has already begun to stimulate conversation sparking awareness of people who are homeless, people who only live in the shadows for most middle-class families.
It’s more important than ever that young women develop a social awareness of the larger world around them. When I grew up all the dolls also had the same complexion.

This is the typical American way of shifting responsibility of teaching your children values to other people or even corporations. TV, toys and computer are in charge of the average middle class family kids upbringing.

All sites ranking for this particular keyword are very relevant. But as a new kid on the block, how can you get any traffic to your site if you happen to target American Girl Dolls? Right, you can buy your way into the rankings using Adwords. Quite surprising that there are only 2 advertisers on this keyword who are willing to pay for to get traffic.

The brand owner; American Girl, is buying it’s own keyword. Probably American Girl wants to stay on top of their own brand, and does not want Amazon to take the top spot by just paying a higher cpc.

Now, if you are looking to buy an American Girl doll, Google is only giving you two options, the original brand owners shop and eBay.

On eBay you can find a really large selection of American Girl dolls. Almost 17,000 dolls are for sale on eBay. This must have made the eBay page relevant to the user intent if they had shopping in mind.

External sources also tell us the American Girl Dolls are in great demand. A large number of blogs are writing about the dolls, as it is popping up in the Internet Pulse on my New-Pulse project. For September 29th, American Dolls was the 9th most used keyword in the post titles from the blogs we are tracking in this category.

On the site, the average searcher is placing a bid 8% of the times they are looking for an American Girl doll. This makes the the keyword not as attractive as others, like the Morgan sliver dollar or Similac coupons.

American Girl around the world

Using the Google insights tool, it is striking that the majority of searches on American Girl are being done in Myanmar. For a country with restricted access to the internet, the search volume is rather high. Or is there a hidden message in the sites which rank on the first page?

End of the Rant

How I got here does not really matter. It’s just a little testing on using the keywords on a page  and trying to rank for the search term American Girl. If you would like to buy an American Girl doll, I highly recommend you check out the almost 17K listings on eBay.

UPDATE: My wife just found an awesome site for doll clothes & accessories. Now I fear my credit card limit is being broken as we speak…

Also, you can find some good pictures of the American Girl dolls on Flickr under creative commons, so posted here with attribution: http://www.flickr.com/photos/yuan2003/ / CC BY-NC 2.0